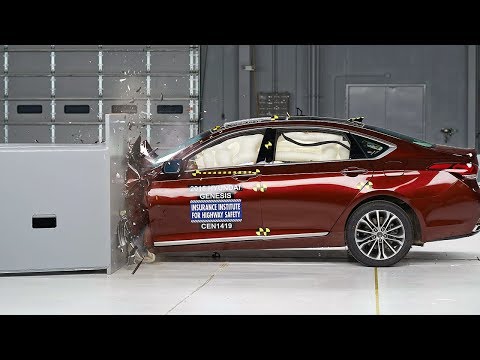 Fresh off a complete redesign, the 2015 Hyundai Genesis is shaping up to be quite a thorn in the side of luxury automakers. Aside from its upscale design and advanced technology, the new Genesis was just awarded the highest safety rating of Top Safety Pick+ by the Insurance Institute for Highway Safety (IIHS).

On the 2015 Hyundai Genesis, these features are all available on the V-6 Genesis models with the $3,500 Tech Package, which includes smart cruise control and automatic emergency braking as well as lane departure warning and lane keep assist – all of this tech comes standard on the V-8-equipped Genesis sedans. To get this Tech Package on the V-6 models, though, buyers must also opt for the $4,000 Signature Package that adds in luxury features like panoramic sunroof, blind spot detection, power rear sunshade and ventilated front seats.

What does this mean? If you’re trying to get a TSP+-rated 2015 Genesis sedan, you’re going to have to spend at least $46,450, which is a bit more than the $38,950 base price before destination charges. At this price, the Genesis costs more than the 2015 Volvo S80 but is well below the $61,345 price tag of the 2014 Acura RLX. Along with the new Genesis, these two sedans are the only other large luxury cars to achieve this top level of safety so far.