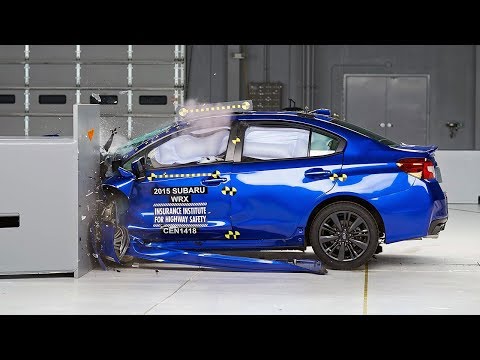 The 2015 Subaru WRX is just one double apex away from a street-legal rally car. And now news from the Insurance Institute for Highway Safety (IIHS) might be cause for even more temptation to, yes, convince your spouse that one could double as responsible family transportation.

ALSO SEE: Jeep Five-Year Plan: An SUV For Every Niche

Put through its rigorous battery of crash tests, the new-for-2015 WRX was named a 2014 Top Safety Pick.

This means that it scored top marks in all tests including the two most important to rally drivers: roof strength and the small frontal overlap. Of course, you’re still going to need to get a roll cage and fuel cell if you’re really looking to race the WRX -- and you should probably remove those child seats first -- but you get the point.

This crash safety shouldn't be all that surprising looking at the rest of Subaru’s lineup. The automaker now has six out of its seven products (the discontinued Tribeca not included) earning top safety scores from the IIHS. The sporty BRZ is the only current Subaru vehicle not to be on the Top Safety Pick list.

Like the closely related Impreza and XV Crosstrek, the WRX misses out on the highest rating of Top Safety Pick+ since it does not offer the crash prevention of Subaru’s EyeSight. The IIHS has supplied a video of the 2015 Subaru WRX being obliterated by the small overlap test, but it shows that the driver would have a low risk of injuries in this crash.