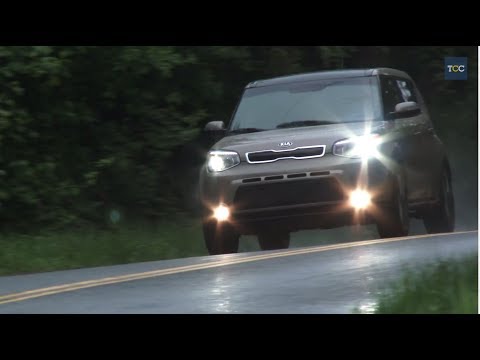 The Kia Soul wasn't supposed to be a hit, but the funky styling and driving hamsters clearly paid off. Today, the Soul is one of Kia's best sellers.

For 2014 the Soul gets a major revamp, with better details and better gear. But has it gotten better from behind the wheel?

The original Soul is a tough act to follow, so you can understand why Kia took an easy-does-it approach. Look closely and you’ll see it has a little more personality. Those big fog lights and grille stand out more than before, and we like the flared wheel wells.

At the back, the Soul is cut and folded in a fun new way. The body-color panel floats inside blacked-out trim, and hides the fact that the hatch is 2.4 inches wider than before.

The Soul's cabin is fresh and nicely built with a chunky steering wheel, sporty gauges, and a dash with higher-quality feel. The climate and audio controls are tilted slightly toward the driver.

The Soul isn't all that large, but adults and their stuff will fit well inside. The driver sits high, which might be one reason the Soul is so popular with younger drivers. The front seats are very comfortable, and in back, there’s plenty of head and legroom for all but the tallest adults. You wouldn't want to be the third adult squeezed in back, but when is that ever true?

No matter where you're sitting, you'll be safe. The latest Soul gets five-star and Top Safety Pick awards, and a rearview camera is standard on almost every model. Visibility can be a mixed bag, though -- those big rear pillars can make lane changes tough.

On the road, the Soul still doesn't grab us like a hatchback Focus or Mazda 3. The base four-cylinder only makes 130 horsepower, and it can feel taxed with more than a driver aboard. The bigger four-cylinder with 164 horsepower is the engine you want--but it comes only with a six-speed automatic. If you want a manual, you have to get the smaller engine.

ALSO READ: Women Say Men With Hot Cars Are Arrogant & Compensating For Something

At least there's no penalty for the bigger engine. The EPA rates both Souls at 26 miles per gallon combined.

If you're looking for a canyon-carving hot hatch, this isn’t it. But the Soul is happy zipping around town on errands, even on highway cruises. The steering feels better this year, and you can even change the steering effort if you want. This new Soul also controls its ride much better than before. It's more composed, and more quiet, too.

The Soul comes in three trim levels--base, Soul Plus (+), and Soul Exclaim (!). Priced from just over $15,000, even the base Soul comes well equipped with power features, Bluetooth, a six-speaker sound system with USB and aux inputs, and three months of satellite radio. Our loaded Soul Exclaim had a $26,000 price tag and everything from Kia’s UVO infotainment system and navigation with a nice touchscreen to a cooled glovebox and heated and cooled leather seats.