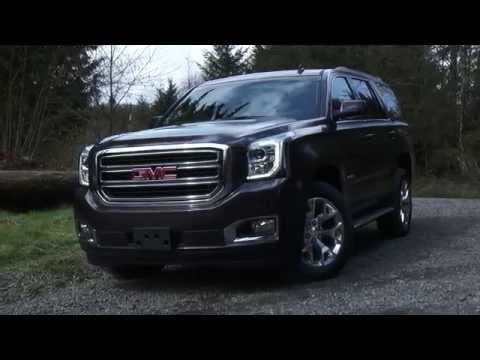 The world has changed a lot since the Nineties. Gas costs about three-and-a-half times as much as it did in 1999, and automakers are scrambling to create efficient vehicles. But full-size SUVs are still big business, and GM pretty much owns the market segment with its Chevrolet Tahoe and GMC Yukon. They're new this year, and a lot has changed.

So how do the new versions stack up against the previous best-sellers, and how do they adjust to the realities of 2014? We drove the latest Yukon to find out.

For the first time ever, the Yukon doesn’t share a single body panel with the Sierra pickup truck on which it’s based. The looks are finally up to date with most models getting projector headlamps. Despite this very angular look, GMC says it’s much more aerodynamic than the previous model in an effort to achieve better fuel economy and a quieter cabin.

The interior has been substantially upgraded over the previous model. The look and feel of these components resonates with quality which is something we couldn’t say with the last Yukon. Denali models even feature real wood trim and burnished aluminum.

Both the first- and second-row seats are comfortable and supportive, and this second row gains two inches of leg room over the previous model. A 60/40 split bench seat is standard but these bucket seats are a nice option if you don’t need to haul as many people.

The major news for the interior is the third row. It finally folds flat and it does so with the touch of a button. There’s no more having to haul the third row out of the Yukon when you don’t want to use it. That said, it’s too bad GM couldn’t integrate it better. GM raised the load floor with a cargo bin to make them fold flat, creating a higher liftover height, and cutting into cargo room. You can remove the cargo bin, but then the third row doesn’t fold flat.

Sitting in the third row is the same old story. You’ll be putting the kids back here, and in a pinch, adults, but only to drive short distances. If you really need to utilize the third row for any considerable distance for adults, and have cargo space left over, you’ll want the Yukon XL.

From dashboard to liftgate, the 2015 GMC Yukon is packed with more technology and features than ever before. There are up to six USB ports and six power outlets including a 110-volt grounded outlet. There’s this available rear-seat entertainment system with Blu-Ray capability, and a nifty “conversation mirror” so you can keep an eye on which kid is hitting whom. We love the 8-inch GMC IntelliLink system with optional navigation, as it has nice large virtual buttons and it’s simple to use.

Neither NHTSA or the IIHS has tested the new Yukon yet, and while this new one is structurally different than the old one, that old one did score well in past tests. We’d imagine this new one will do as well or better as GM has improved the rigidity of the structure. Further, there’s new safety tech here such as forward collision alert, park assistance sensors, lane departure warning, lane change assist, rear cross-traffic alert, and adaptive cruise control among the standard and optional equipment. There also are available front-center airbags when equipped with front bucket seats.

Fuel economy is rated at up to 18 mpg combined on rear-wheel-drive Yukons. You can shave a mile per gallon off that if you go for the larger V-8 engine.

Driving the new Yukon is a lot like driving the old one, as it should be. But the electric power steering, improved structure, and drivetrain upgrade all come together to make it better than the previous model. We like the seating position, and the overall feel is one of capability.

So what’s the bottom line with the 2015 GMC Yukon? It’s a better Yukon than ever with modern V-8 engines, better packaging, and a very well-dressed cabin.