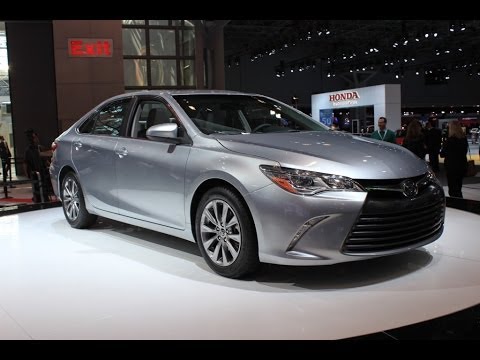 The mid-size sedan market is brutal. It’s rife with excellent cars like the Ford Fusion and Honda Accord. So even if you’re the best selling car in America, you might not be the best.

That’s what Toyota is setting out to change with the 2015 Toyota Camry, with what it calls a sweeping redesign just three years after the last major change. The Camry gets a completely new look inside and out, as well as handling upgrades.

Outside, the Camry’s updated look is a welcome change. It looks more refined and contemporary—a much better effort like the one Toyota put into its big Avalon four-door. LED lighting and tapered taillights are pretty touches, though we could do without the cliched bar of chrome across the trunk.

Inside, Toyota says the dash has a more high-tech look. It’s less chunky and has a higher grade of materials and soft-touch trim—and there’s a new storage bin for smartphones that has a wireless charging pad.

With about 2,000 new parts, Toyota says it’s put lots of work into improving the Camry’s handling. The suspension has the same design, but with more body stiffness and noise insulation and revamped electric power steering, we can hope the Camry tightens up its handling. There’s a new XSE edition, with 18-inch wheels and its own suspension tuning above and beyond the mildly sporty SE edition.

Under the hood, the power trains remain the same, with a choice between a four-cylinder, a V-6, and a hybrid drive system. The Hybrid gets its own sport package this year, too—a first for the Camry lineup.

Will all the changes add up to a Camry that’s closer to the high bar set by the Accord and Fusion? We’ll be driving it soon, so stay tuned for our first impressions. Until then, read more in our 2015 Toyota Camry preview.