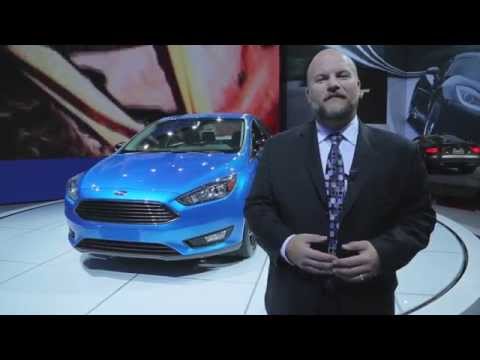 The Ford Focus is the world’s best selling car—and it was The Car Connection’s Best Car To Buy 2012. After a few years, the Focus is still one of our favorite compact cars, either as a hatchback or a sedan. It handles well, looks great, and has one of the sportiest compact models in its range—the zoomy Focus ST.

This year it’s up for a quick refresh after three years on the market—and it's been unveiled at this year's New York Auto Show.

This year, Ford’s taking the Focus in a different direction with a new turbocharged three-cylinder engine. It won’t be the base engine—you’ll have to pay more for it—but Ford expects it to be the most fuel-efficient powertrain in the Focus lineup. One thing though: you’ll have to know how to drive stick to extract that gas mileage, because the three-cylinder Focus will come only with a six-speed manual gearbox.

Outside and in, the Focus wears a new look. Up front, there’s a version of the wide-mouth grille that’s also on the Fusion and Fiesta. It’s a cleaner front end that calms down the Focus’ swoopy look in a good way.

Inside, the Focus is still a little over styled, but resculpted vents and trim give it a look and feel that's both original and complex. It sets it apart in a crowded class of very good compact cars.

You won’t get big room inside any Focus, but you will get lots of available luxury features, everything from leather seats to a standard rearview camera and blind-spot monitors. The Focus is still one of the safest compact cars, with top ratings from the Feds and from the IIHS.

As for the rest of the Focus lineup, it carries over, from the Focus Electric to the Focus ST.

Pricing and fuel economy figures haven’t been released, so stay tuned later this spring for our first drive of the revamped lineup--or read more in our 2015 Ford Focus preview.