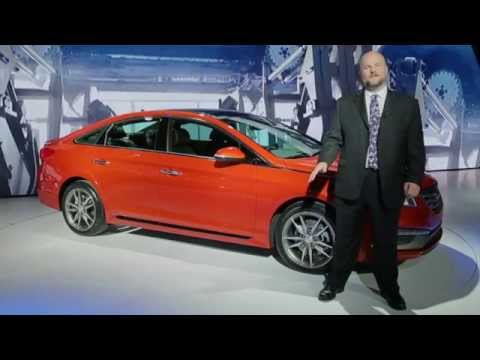 The Hyundai Sonata has been a bold move—a bold move that has paid off. Still, it’s time for change after four years.

That brings us to this car—the 2015 Hyundai Sonata coming later this year after a world debut at the 2014 New York auto show.

For the past four years, the Sonata’s daring, exaggerated shape has grabbed all the attention it could. For 2015, the design gets calmed down a lot. It’s a more sober take that might actually age better than the more flamboyant car that was introduced back in 2011. A little bit longer and wider, the 2015 Sonata has a more subtle take that seems more tailored, but maybe a little less modern.

The same is true for the cockpit. All the controls have been reorganized and the swoop is gone, replaced by a horizontal look like the one on the new Hyundai Genesis.

As for performance, Hyundai’s tuned the Sonata’s four-cylinders for more responsive feel, but output dips slightly. The 2.4-liter four now makes 185 horsepower, the turbo 245 horsepower. A six-speed automatic is standard. Hyundai’s also beefed up the Sonata’s body under the skin and says it’s turned up the handling in the sporty direction while also making the Sonata quieter on the highway.

The Sonata inherits a lot of the safety technology that’s arrived in the bigger Genesis sedan, including blind-spot monitors and adaptive cruise control. Seven airbags are standard—and it seems a good bet that the Sonata will keep its top crash-test scores.

A new infotainment system comes to the Sonata, with different features at different trim levels. The basic setup offers Bluetooth audio streaming and USB connectivity. With the optional navigation system, the Sonata can stream Pandora and can record up to 22 minutes of satellite radio—and it integrates with Apple’s Siri Eyes Free.