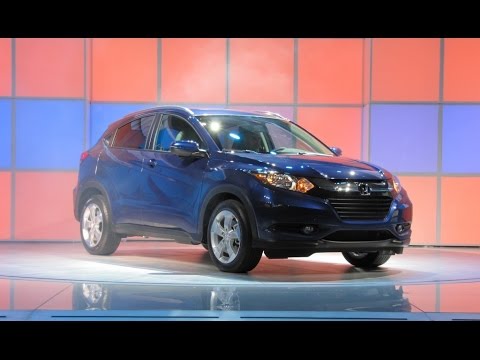 The completely new Honda HR-V—a version of the Vezel that's already on sale overseas—will ride on underpinnings that are shared with the redesigned 2015 Honda Fit—and it will be built at the same new assembly plant in Celaya, Mexico.

The HR-V won’t just carry over unseen parts; it’ll inherit the Fit’s marvelous Magic Seat interior design, which features a rear-seat arrangement that can be folded to multiple configurations and go completely flat into the floor—unlike many other subcompact cars and other small crossovers.

As a direct rival to small crossover (or tall-hatchback) models like the MINI Cooper Countryman, Subaru XV Crosstrek, and Nissan Juke—as well as the 2015 Chevrolet Trax, a vehicle that was also confirmed for the U.S. market at the New York show this week—the HR-V will land in what's anticipated to be one of the fastest growing segments of the market, sales-wise, over the next several years.

“Both Fit and HR-V demonstrate how great things can come in small packages, and no one does this better than Honda,” said senior VP and general manager of American Honda’s automobile division.

The 2015 Honda HR-V will arrive this winter, potentially as early as December. If you think a vehicle like this might fit your needs, it could be worth waiting around for details on specifications, features, and pricing—all expected soon.