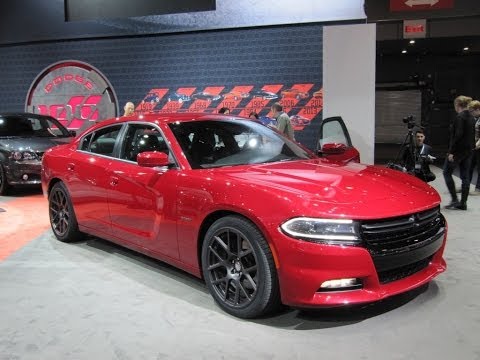 It doesn’t seem like the current Dodge Charger is as old as it is, but the big sedan has been on the market in its current form since 2011. As seen at the New York Auto Show, the full-size Dodge will be getting an even bigger overhaul for 2015 with a new look inside and out and even a few changes made under the skin.

While there were many changes made to the 2015 Dodge Charger, the most significant is the new exterior styling. A further evolution of the current design language found on the Dart and Durango, the 2015 Charger features rectangular headlights with LED running lights and the now-signature LED racetrack taillights, which now wrap around the rear quarter panels. The overall effect might not be as dramatic as the 2011-2014 Charger, but it brings a more modern and muscular look to the car.

Another key update Dodge made to the Charger is that all models will now get the eight-speed automatic transmission. Previously, this transmission was only offered with the 3.6-liter V-6, but now those desiring the Charger R/T and its 5.7-liter Hemi V-8 can now get the more advanced transmission as well. Even better, the shift lever inside the car looks less stumpy and easier to use than the current offering.

Speaking of the interior, the 2015 Charger builds on the changes made in 2011 with a sportier three-spoke steering wheel, a reconfigurable gauge cluster and new safety technologies like lane keep assist and adaptive cruise control with full stop.

All-wheel drive can still be had on the Charger SXT and SE trim levels. Look for the 2015 Dodge Charger to go on sale by the end of the year.