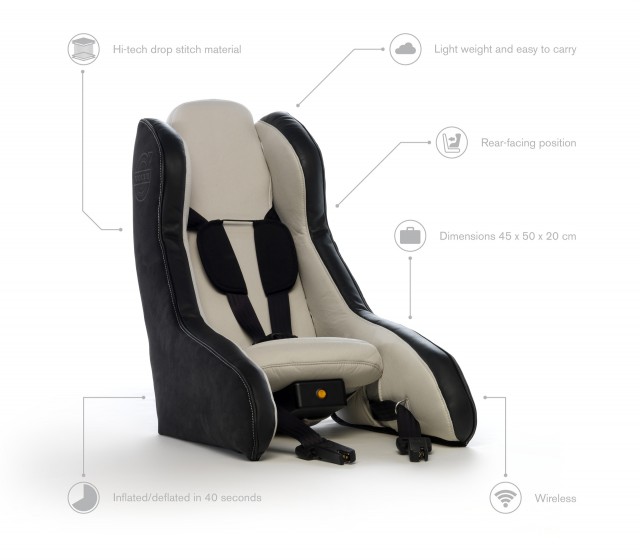 Volvo is usually at the cutting edge of vehicle safety with advanced technologies, but when it came to creating a safer and less bulky child seat, it stayed relatively low tech. Check out the Inflatable Child Seat Concept, which is an attempt at trying to create a car seat that is lightweight and easy to carry without sacrificing any safety.

The highlight of this seat is how little it weighs. At just 11 pounds, Volvo says it weighs about half as much as other rear-facing child seats, but the best part is that it can be deflated into an easy-to-tote backpack when not in use. Inflation and deflation takes 40 seconds, and it is done automatically with an integrated air pump. It even has a built-in Bluetooth connection that allows users to perform a variety of functions including remotely inflating the seat. Volvo did not say what any of the other functions were, but this could be a good application of some sort of sensor that helps prevent children from being left in a vehicle.

The material used for the seat is drop-stitch fabric, which Volvo says was developed by the military for use on inflatable air planes, and it allows the seat to be inflated to a high pressure to ensure that it is strong enough to protect a child in the event of a collision. From the images, it would appear that this seat can only be attached as a rear-facing seat, but Volvo says that it can be kept in this position for three to four years.

DON'T MISS: Now In The Netherlands: A Smart Highway That Glows In The Dark

In the U.S., the National Highway Traffic Safety Administration (NHTSA) says that children should definitely be in rear-facing seats until age two, but adds that they should remain in rear-facing seats until they meet the height and weight requirements of the seat being used. For Volvo, it looks like there is more space between the child seat and the vehicle seat to provide added comfort for the child’s legs while buckled in.

At this point, Volvo has not indicated if it plans to bring such a seat to the market, but it did release a video showing the seat in action.