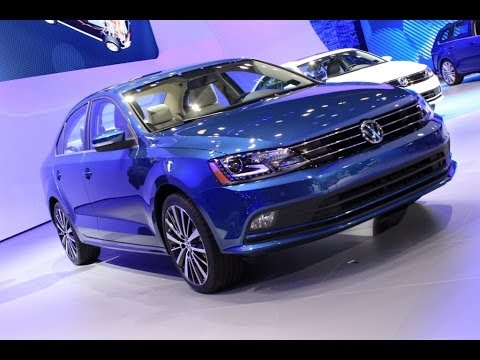 Just two days before the beginning of the New York International Auto Show, Volkswagen has revealed a round of revisions that will come to next year's compact Jetta sedan.

The car's exterior receives a few subtle changes to the front and rear fascia, which VW claims should aid in improving the Jetta's aerodynamics. Shoppers interested in well-equipped models will also have the option of adding bi-xenon headlamps and LED daytime running lights, which were previously exclusive to GLI and Hybrid Jetta trims. The car's interior has also been updated with a new steering wheel and infotainment/climate controls.

Under the hood, Jetta 1.8T and TDI models receive an active radiator shutter that closes to shorten engine warm-up times. The diesel engine in TDI models has also been updated, and VW anticipates the new engine to receive an EPA highway rating of 45 mpg, which nearly closes the gap between diesel- and hybrid-powered Jetta models.

The Jetta now offers optional driver safety systems, including blind-spot detection, frontal collision warning, rear cross-traffic alert, and adaptive lighting for models equipped with the bi-xenon headlamps. Following the 2011 redesign of the Jetta that removed many of the premium-feeling materials offered on previous models, we're glad to see the inclusion of technologies seen in many luxury cars for the 2015 model.

Generally speaking, it seems like the Jetta is heading back in the direction of more premium options and features. That's a smart move with tech-laden cars like the Mazda3 on the market today, and shopper expectations for economy cars ever on the rise. However, that won't stop VW from earning thousands of new, younger buyers with the modern, affordable Jetta.