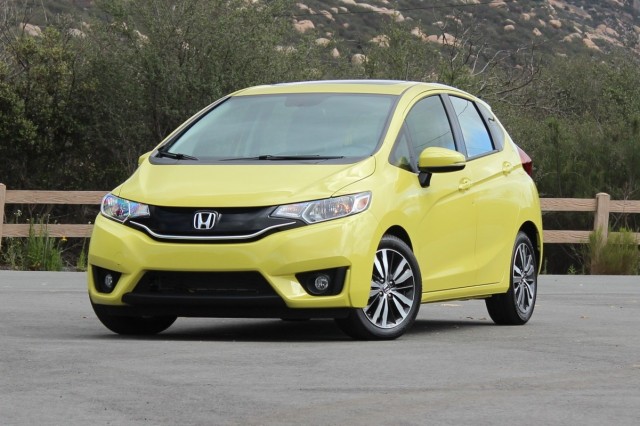 The Honda Fit has made a fitting name for itself, as the best cheerleader out there for affordable, practical hatchbacks. And with an all-new 2015 Fit reaching dealerships soon, Honda heads into market with a built-in advantage.

Back when the Fit showed up, arguably around the peak of the bigger-is-better SUV craze, it made some economy-car preconceptions seem unwarranted. The first two Fit generations, with their cavernous Magic Seat interior and beyond-just-zippy driving experience, are indeed tough acts to follow.

For 2015, Honda hasn't strayed far from the packaging brilliance of those earlier models, but it's aimed at giving this model more value for the money, and making it a little smoother and more easygoing to drive.

We'll get to that—as well as why we aren't quite as smitten with this latest Fit from the driver's seat—but first off, the all-new 2015 Honda Fitis a very good-looking small car, and it's far more interesting to look at than most affordable subcompacts. It doesn't look like any other current rival, and we like how it sheds the long-snouted look of the outgoing model, and goes with a form that's a little more wedgelike and sculpted, with more attention to the fine details at the front and rear. The side sculpting adds more depth to the design, but it's the smooth arc of the front headlights and grille, the arc of the roofline, and then the partly blacked-out hatch design with large rear lamps that really together make this design pop. Honda has also gotten a bit more adventurous with colors for 2015; we spent much of our time in a test car in Mystic Yellow Pearl, which seemed to accent all that's great, design-wise, about the new Fit, and match its flamboyant personality.

True to its name, you can still fit all sorts of things you otherwise wouldn't try in a small car...a surfboard, or a large potted plant...or have the seats recline to a futon-like position. Honda has applied its 'man maximum, machine minimum' concepts to the Fit, and it's ended up with an interior that works even better than before, even though it might technically be somewhat smaller for cargo.

Overall length has been reduced by 1.6 inches, while the wheelbase has been stretched 1.2 inches. With some other repackaging tricks, like thinner, repositioned seats, rear-seat passengers get an additional 3.1 inches of legroom, officially, and there's slightly more width inside. Factor in the more cockpit-like instrument-panel layout, and it's a setup that more people are going to appreciate on first sight. If the Honda Fit had one other edge over the competition before, we would have pointed to its sporty driving characteristics. In a class of cheap entries that are often anything but cheerful—feeling often like buzzy, boomy penalty boxes, the Fit always managed to pack a level of verve and responsiveness that elevated it above the rest. And even after the introduction of the Ford Fiesta and Mazda 2 to the U.S. market, it kept its status as one of the best.

Now for what we see as an inconvenient truth about the 2015 Fit: Honda has made all kinds of significant and major change underneath—new structure, new front suspension geometry, new front subframe, new rear damping setup, smaller rear trailing arms—and while it might technically add up to greater stability, as the company claims, it's just not as much fun from the driver's seat as the previous, outgoing model.

Greater refinement, yes; but some sporty edge lost in translation

On some narrow, somewhat pitchy backroads near San Diego, we found the Fit to be less 'battened down' that we might have expected—as if we were more often in a middle state of suspension loading or unloading—and that might be that the somewhat softer tune and greater suspension travel in front. Honda said that it targeted a more 'linear' feel, and we see that being true; it's not as willing to whip back and forth, or bite hard into a tight corner with the front end barely flinching, as the current model, and ultimately that might make it more stable and predictable...on charts and graphs.

What's missing in turn is the seat-of-the-pants directness that was so ever-present in the previous Fit. In full admission, what we describe here as charming was probably also why the previous Fit made some enemies, with more road noise in the cabin than some other models in its class, and why the ride quality was by no means at the top. The 2015 Fit improves by leaps and bounds in that—with input-separation damper mounts, for example, helping to isolate major road shocks without any loss in control.

There are still plenty of signs, too, that Honda's applying a higher level of detail to the driving experience, yet working with what the masses want. The electric power steering system in the Fit is column-mounted, but it feels more responsive, precise, and reasonably well-weighted than you'll find in just about any other small car. It's also just not up to the high bar of the outgoing model's steering. The brake pedal is also precise and easy to mete out, stopping within an inch or two of where you intend. And the instrument cluster is simple and sophisticated, with round gauges that stand in stark contrast to the gimmicky setup of some other models in this class.

The new Fit weighs slightly more than the outgoing car, but it gets a power boost that more than makes up for it—along with two transmissions that help make even more of it. The 1.5-liter in-line four that powers all versions of the Fit in the U.S. now has direct injection plus other improvements and makes 130 horsepower 130 horsepower and 114 pound-feet of torque—both significant gains over last year's engine. This new engine has direct injection, improved block cooling, piston oil jets, and a reduced-weight crankshaft, along with an all-composite intake manifold.

Last year's five-speed automatic transmission is gone from the lineup, replaced by a continuously variable automatic transmission (CVT) that actually does a really good job in avoiding the rubber-band responsiveness and engine drone that can drive commuters crazy. Honda's so-called 'G-design Shift' programming, as is used in the Accord, works as it should here, raising revs naturally with speed then ramping down to low rpm at cruise. The only exception comes when you push the accelerator most of the way to the floor and discover that speed isn't gathering all that much quicker but you're generating a lot more noise (peak torque arrives at 4,600 rpm, and the engine becomes much noisier around there (by the way, the engine isn't tuned to sound 'good' in any way, so it's not a pleasant noise).

As with most CVTs in cars that have any kind of sporty touch, there's a Sport mode, and here it allows seven ratios through the steering-wheel paddle-shifters (included in all but base LX models). Use those when you're on a challenging road and you'll feel better about it. There's an ECON button, too, as in other Honda products; but don't use it here unless the roads are straight and you're in absolutely no hurry.

If you appreciate a good manual gearbox, you should go for it here. Honda has added a gear this year, and made the linkage both smoother and shorter. But we're torn on how we feel about it because Honda has assumed that everyone who chooses the manual will want a sportier driving feel; so instead of adding a deeper overdrive they've made most of the gears lower than before, kicking the ratio formerly used for fifth up to sixth. That means you still spin nearly 4,000 rpm at 80 mph—and definitely sacrifice some mileage for it (Honda told us otherwise, yet the CVT keeps much lower revs on the highway).

What the new Fit hasn't sacrificed one bit of is its Magic Seat convenience; you can still fold the seats flat with no need to worry about headrests, and even go to the vertical mode with one arm, while using the other to hold onto a bag or child's arm. With everything folded, the space feels more vanlike than ever (aided by shorter tailing arms and a lower-profile fuel tank).

What could use some more attention is in front. Taller drivers almost universally (we're talking any of those over six feet tall) wished for more rearward seat travel, while the cushions felt short and on the passenger side the lack of height adjustment and an odd angled floor led to splayed-out knees and discomfort. Ironically, at 6'-6”, I found myself more comfortable in the back seat than in the front passenger one—and getting in and out of the back seat was easy thanks to the high ceiling and large door cutlines.

You can get leather seats for the first time in the Fit (yes, of course with contrast stitching). They're quite nice; but there are some other less convincing things about the interior—like the molded-in faux stitching on the dash, and the various materials and trims that don't always match. And some other design attributes that we really liked—the double glove box, for instance, have been quietly removed (reach up from the current lower glovebox and theres a mostly empty space with ducting).

The first-generation Honda Fit felt a little bit like it was only here for a visit, with its not-completely changed JDM interior outclassing every other American-market econobox in sight. It wasn't so well configured for U.S. safety or American-size drivers, either, but the second-generation Fit, like a star student, seemingly solved all of those issues, one-upping the Civic in many minds but still coming up a bit short on features. Now the 2015 Fit kicks off an all-new generation of this now-global model (sold in 160 countries around the world, with global sales totaling 76 million units so far, and annual sales last at nearly 5.2 million)).

And our Mexico-built version allows more features and value—where new shoppers hopefully will notice. The 2015 Honda Fit starts at just $16,315 for the base manual-transmission LX. For the EX, it's $18,225; and in either case the CVT costs $800 more. A top-of-the-line EX-L with Navi will total $21,590. Those prices aren't up much versus comparable versions of the outgoing version.

Keyless entry, cruise control, a rearview camera, and air conditioning are among many items now included even on the base LX, while mid-level EX models get push-button start, upgraded infotainment, and Honda's impressive LaneWatch wide-angle lane-change aid from the Accord. EX-L models heap on leather and more luxury, while a Navi model at the top finally gets a navigation system worth the premium, with a high-contrast display and live traffic.

We'd argue that the 2014 Ford Fiesta—which we'd had an extensive drive in just a week before driving the Fit—offers a lot more driving enjoyment now that the Fit has been softened somewhat. Prices are comparable; but the Fiesta has nothing like the Fit's versatile cargo layout, and the infotainment interface on the Ford remains a confusing mess while the new Fit gets some clear, straightforward touch-screen systems that from first blush, do everything they should.

Overall, the 2015 Honda Fit is responsive, safe, and still sporty to most expectations. It's just not quite as much fun to drive as before. And while the formula has changed more than we'd hoped, one thing hasn't: It's still just as much of a cheerleader for why a hatchback could be a great fit for your household.