The Most Unusual Car Features Of All Time 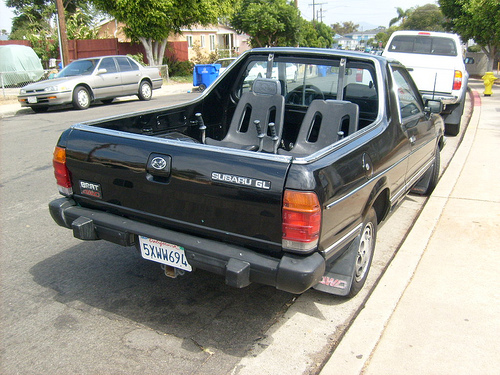 You may have noticed television commercials for the Mercedes-Benz S-Class, touting hot-stone massage seats and multicolor ambient lighting.  It even atomizes a choice of four scents throughout the impeccably appointed cabin.  And the list most definitely goes on.

Through the years, Mercedes has paired innovative and/or unusual features come with highly curious names like Airscarf and Magic Sky Control.  The automaker isn’t alone, though.  Manufacturers have done the same for decades in pursuit of comfort, fuel economy, sales and occasionally, reasons unknown.  The following run freely across lines of ingenuity, practicality and logic.

Almost 40 years ago, Subaru entered the car-based pickup act with the Brat.  The name was neither a celebration of misbehaving kids, sausage or the diet that can follow too much sausage.  It was an acronym for Bi-drive Recreational All-Terrain Transporter.

Smaller than the domestics and with all-wheel drive, it was useful and fun.  One—make that two—more things that set it apart were the two rear-facing seats mounted in the bed.  Safety issues aside, it was a clever way to circumvent the U.S. government’s dreaded "chicken tax" that to this day plops heavy tariffs on imported pickups.

Say what you will about the C4 Corvette, and never mind that a new minivan today can thump an unmodified early edition in a stoplight challenge. When it debuted for the 1984 model year, it was a hot ticket. It got even better when a manual transmission returned to the lineup late that year. There was just one little issue: it didn’t work.

Known as the 4+3, it was a conventional Doug Nash four-speed manual with three automatic overdrives added for second through fourth, button-controlled by the driver.  While helpful for fuel economy, it proved problematic and was dropped in favor of a six-speed ZF unit for 1989.

While on the subject of gearboxes, 1979-84 Dodge Colts and Plymouth Champs had something in common with some early semis, four-wheel drives and muscle cars: two levers sprouting from the floor.

In this application though, the Mitsubishi-designed unit (which also saw duty in a few Mitsus) could be regarded as a cleverly-marketed solution to an engineering conundrum.  In short, the extra lever was needed to avoid having four reverse gears and one forward.  Marked with Economy and Power settings, the driver could theoretically use it simultaneous with the main four-speed stick to have an eight-speed manual.  Or, it could just be ignored for eternity.

Not to be associated with a menu item at a sketchy massage parlor, BMW endowed the 7-Series with a feature that keeps the driver behind the wheel.  Not that the throne at the helm is a bad place to begin with, mind you.

This trick enables control of the front passenger seat using the driver’s power seat buttons.  Hence, the driver doesn’t have to get out and go around to adjust it.  The idea is for rear passenger legroom to be effortlessly afforded as desired.  You could also mess with a dozing friend riding shotgun, your call.

Tilt and often telescopic steering wheels have become standard fare in cars of all price ranges, and often a set-it-and-forget item in single-driver households.  Fifty-odd years ago, it was a luxury.

For the 1961 Thunderbird, Ford offered its Swing-Away steering wheel, which could move several inches to the right when parked to allow better access in and out of the car.  Safety mechanisms prevented the cars from doing their trick while actually on the road.  Ford later offered this on other models and incorporated angle adjustment on the aptly named Tilt-Away, but by the end of the decade, tougher federal safety standards brought it all to an end.

Japanese vehicles of the 1980s typically had no lack of random switches, buttons and dials.  Certain Nissans from the period came with dual fuel gauges, not to indicate the level of dual fuel tanks, just the one.

So why the duplicity?  The primary gauge was conventional, with a normal sweep from full to empty.  The secondary gauge would at first glance seem pegged and malfunctioning.  As you drove near empty, however, the secondary unit’s needle began moving and served a purpose as a virtual magnifying glass of how little gas remained.  Clever, but conventional wisdom would have us spare our fuel pump and the risk of getting stranded in the first place. 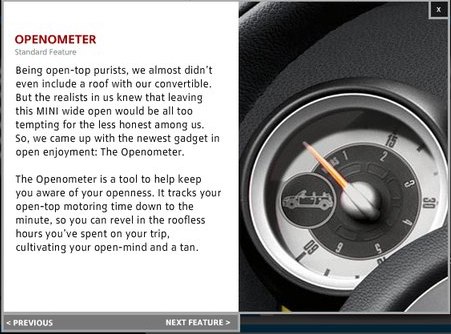 BMW has done a commendable job of marketing Mini with all the British heritage and cheekiness that can be mustered.  One example isn’t on its website or in ads.  It’s the Openometer, and it’s along for the ride.

Convertible models are treated to this gizmo, for whatever it’s worth.  It’s sole reason for existence is to count the hours you’ve had the top down.  And that’s all we have to say about that.

We take for granted the ability to hold our entire music library in one hand and sync for wireless streaming on the road.  It was a little different in 1956, when car audio meant an AM radio with a single dashboard speaker—maybe one more in the rear if you were lucky.

Chrysler brands that year featured the Highway Hi-Fi option that adapted the best of what was available: vinyl on a turntable, mounted under the dash.  It’s said the record player was engineered to absorb vibration and not skip, but its one-year availability suggests otherwise, and that more drivers settled for the primitive radio.

We’re back to where we started, the newest S-Class, and one more excellent feature with a highly curious name.  To the dismay of big brothers everywhere, Magic Body Control will not force siblings to hit themselves, nor can you compel others to do your bidding.  Instead, this is about passenger comfort. In daylight, radar and stereoscopic cameras work in conjunction to “see” irregularities in the road ahead and react by adjusting the active suspension by the time you hit the pothole, bump, whatever.  Not to be interpreted as a wallowing ride on marshmallows, it absorbs and compensates but has been programmed to function in Comfort and Sport modes alike up to about 80 mph.