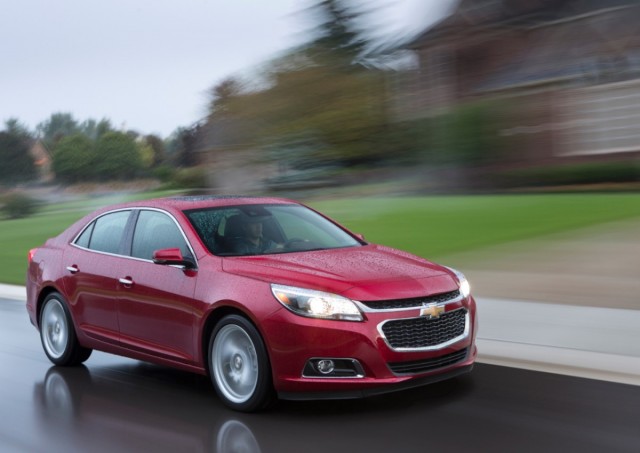 Chevy's mid-size sedan has earned top 'good' scores in every category of testing—ranking it among a group of top-tier safety performers that includes the Ford Fusion, Honda Accord, Mazda 6, and Subaru Legacy as mid-size sedans that have earned the Top Safety Pick+ nod. The 2014 Chrysler 200 and Dodge Avenger, as well as the Kia Optima, Nissan Altima, Toyota Camry, and Volkswagen Passat have earned Top Safety Pick status.

The TSP+ designation requires vehicles to earn high marks in all areas of crash worthiness (with 'good' or 'acceptable' ratings in the new small overlap frontal test) as well as a basic, advanced, or superior rating in frontal crash prevention. With the safety package that adds forward-collision alerts and lane departure warning, the Malibu earns the basic distinction.

It should be noted that this is a retest for the 2014 Chevrolet Malibu, which originally earned 'marginal' in the small overlap test. But the Malibu earns a great set of federal NCAP ratings as well, including a five-star Overall rating and five-star assessments for frontal and side impact. There's a four-star rollover rating, but that isn't enough to keep us from giving it a perfect-10 safety score—especially when it includes a total of ten airbags (with front knee bags and separate rear side bags), and those active-safety features are available on the mid-range LT, not just the top LTZ.