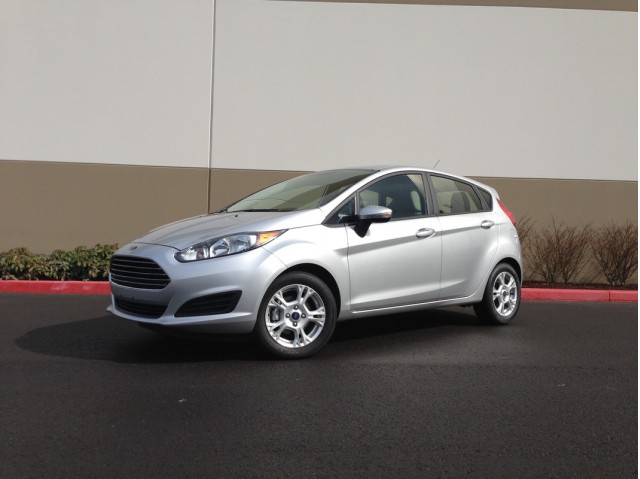 No matter what you’ve started to consider in a next new car, there are two things that taking a quick spin in a 2014 Ford Fiesta can make abundantly clear.

The first is that small cars don’t have to be so soulless and appliance-like. The second? Low-price new cars don't all feel so...cheap.

The 2014 Fiesta, for example, has the lowest bottom-line sticker price that this editor has encountered this past year—just $16,845 as tested, for a five-door Fiesta SE hatchback.

And it’s a blast to drive, with the sort of endearing character that you’ll only otherwise find less practical (dare we say more gimmicky) cars like the MINI Cooper and Fiat 500.

ALSO SEE: Toyota Hit With $1.2B Recall Fine; How Will It Affect Shoppers, Owners?

There's something very...festive in the engine bay

We found the 120-horsepower four-cylinder engine to be zippy and smooth. Provided you’re not determined to wring out the last 1,000 rpm of its revband, it isn’t too noisy either. When accelerating or tapping into power it felt responsive yet refined enough in the 3,000 to 4,500 rpm range, which the neat gear linkage of the five-speed manual and its light clutch made easy.

The only thing we would like to make different is to have the accelerator be more linear; as with many low-priced cars, it’s artificially progressive—making it feel as if it might have more power to those who drive gingerly. But it can make the car harder to drive smoothly at times at low speed.

Incidentally, early last fall we also drove the Fiesta SE with the PowerShift dual-clutch automatic—as a rental car—and found that while this transmission has been smoothed and soothed in its calibration, it’s still a little lacking in low-speed drivability.

In either case, this is a small car that begs for more; while some affordable hatches barely comply, with buzzing engines, body lean, and shrieking tires, the Fiesta feels athletic—just athletic in a frugal sense.

And frugal the 2014 Fiesta is. Over 115 miles with the Fiesta, we averaged 37 mpg according to the trip computer—far overshooting its 27 mpg city, 38 highway rating given the kind of driving we did: a couple of dashes out to the suburbs, and some shorter trips around town.

It's well worth noting that this is better by 1 mpg than what this editor has seen in the C-Max Hybrid, a vehicle that costs about $10,000 more than the Fiesta. Please also note that we didn't top off the tank and measure mileage ourselves; but even if this trip-meter reading is nearly ten percent off, this is still excellent mileage. By the way, we got 32 mpg in a couple hundred miles of driving some months ago with the PowerShift automatic, including more highway driving in the mix.

Taking a step away from the driver’s seat, there are some pretty significant changes to Ford’s affordable subcompact family this year, and you need only look to the front end to see the most significant part of it. As with most of the rest of Ford’s lineup, the Fiesta has received the clean, open, and blunt Aston Martin-like snout. And it really works here -- especially on the hatchback, where as before the headlights and taillights are stretched out into the fenders; new lower bodywork gives it a little more gravitas, and we’d say that this new, more sophisticated look for the Fiesta is a better fit with subtler colors like the Ingot Silver Metallic of our test car than with the iridescent hues introduced at this model’s U.S. launch a few years ago.

The one area that hasn’t changed as much as we would have liked is, unfortunately right in the middle of the dash. The much maligned slanted-button array—a passenger took one look and called it the 'mad dash'—has a phone-like numeric keypad and a clumsy toggle control and is difficult to orient to quickly, even once you’re used to it.

The seats in our test Fiesta SE remain quite short, but more supportive than we’d expect for what’s in most cases a short-distance commuter, while the coarse patterned cloth was plenty comfortable. Ride quality is rather firm but comfortable enougth, and while there’s some road noise in the cabin, it’s worth noting that there’s an acoustic windshield and more sound insulation -- now to make this model quieter on coarse surfaces than some larger compacts. Adults can sit in the back seat, too -- although we noted that the seat-folding doesn’t fold into the floor with the Honda Fit’s neatness.

For those who place more priority on the driving experience

In our full review of the 2014 Ford Fiesta, we compliment this model’s crisp, nicely proportioned exterior, excellent steering, and strong feature set, but note that low points include the space efficiency (or lack thereof) of the interior, the balky PowerShift automatic transmission, and the base audio controls. All are pros and cons that we’ll stick to after now having put several hundred miles on 2014 Fiestas.

Note that we've upped the Fiesta's Comfort and Quality score from 6 to 7 for 2014. While its interior remains no more space efficient, we think that the softer dash, improved trims, and better sound insulation all add up to a vehicle that's more agreeable from the passenger seat.

The only two subcompacts that come close to offering this level of driving fun are the Mazda 2 and the Honda Fit. With a new 2015 Honda Fit on the way later this spring and an all-new Mazda 2, based on the Hazumi concept from Geneva, on the way within a year,

EcoBoost on the way; will it be better?

Don’t forget, in addition to the delightfully sassy Fiesta ST—a real performance hatchback, really—there's the upcoming 1.0-liter EcoBoost version. We revisited the Fiesta SE to get a good baseline before we take that turbo three-cylinder model for an extended drive in a few weeks—and see if its mileage can pass muster in the real world as well as this naturally aspirated four.

Parting words? I was sad to see this little $16k Fiesta SE go—which says a lot, given the span of price and prestige we see in and out of our parking spaces. Even as you work your way up in this world, to a place where you’re able to afford vehicles with higher price tags; sometimes happiness is a lot simpler (and more affordable) than you might think.