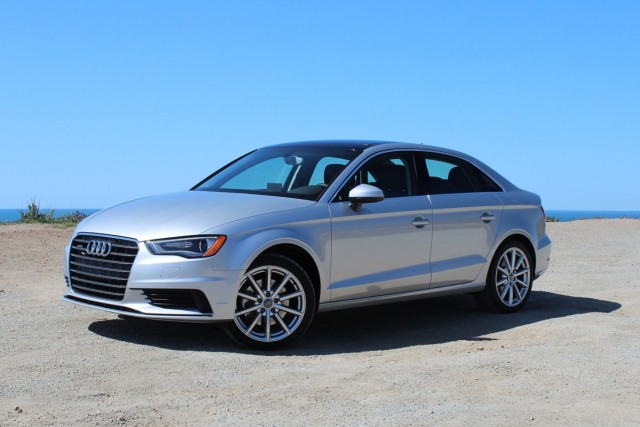 From the driver's seat of the 2015 Audi A3, it's easy to play favorites. This new most affordable sedan in the Audi lineup has the best in-car interface—and perhaps the best combination of connectivity and clean-interface information management—of all the premium compact sedans.

Option one with the MMI Navigation Plus system, and with the new Audi Connect system that includes embedded 4G LTE high-speed data connectivity, you can dial in quick-interacting Google Earth maps, traffic info, and even Street View images of your destination—and enter that destination, accurately tracing a letter at a time, without having to deal with voice commands. And that, while you even share your data connection with passengers.

ALSO SEE: NHTSA Won't Randomly Pull You Over & Test You For Booze Anymore (Without Your Consent)

While MMI, and this car's near-flawless, latency-free infotainment, completely won us over (as well as its super-clean interface overall)—it's truly this new compact sedan's 'killer app'—it was the rest of the car that we emerged feeling only lukewarm about.

The reality is that the A4 family—arguably the model that truly brought Audi back from a deathwatch in the U.S. nearly 20 years ago—has moved up in size (and it's moved upscale). So to tease out more aspirational entry-luxury buyers in the U.S. (and in China, as well as other markets), Audi is this time making the A3 a full family of vehicles—including Sedans, a convertible, and yes, a wagon-like Sportback, which was the only style offered to the U.S. the last time around.

For this new-generation A3, we'll see the Sportback only as a plug-in hybrid—in a year or so—while Audi is pushing the Sedan Stateside, with several additional versions on the way, including a TDI (diesel) and a high-performance S3 sport-sedan variant later this year.

In the meantime, we have two models: a 1.8T front-wheel-drive model, and a 2.0T quattro all-wheel drive model. Audi quotes a 0-60 mph time of 7.2 seconds for the 1.8T model, versus just 5.8 seconds for the 2.0T. But don't let that deceive you; in off-the-line bravado or in transition responsiveness, this past week we found that the two models feel closer than you might think.

A couple of other factors come into play, and one of them is weight. Quattro models are nearly 200 pounds heavier than those with front-wheel drive, and it’s a difference you can feel. We actually ended up preferring the quattro model, for its more settled ride quality (the front-wheel-drive model can be a bit pitchy on some surfaces). The other is that front-wheel-drive models are geared a bit lower, so you seem to have a better choice of ratios at lower speeds especially—a difference that doesn't show in those acceleration times.

There's no such thing as a manual gearbox in U.S. A3 models. All of them get a six-speed version of the familiar dual-clutch automated manual gearbox (DSG), here calibrated just a bit softer most of the time than how we've experienced it in some other VW/Audi products.

Click the shift lever down to engage Sport mode, and upshifts are delayed and given a little more urgency, while the gearbox is more eager to make smooth, rev-matched pre-emptive downshifts to keep revs up. You rarely need to manually order up a shift. With the Sport Package, as we had on the 2.0T model we drove for most of the day, you also get Audi Drive Select, allowing you to choose between Comfort, Auto, Sport, and Individual modes—although with a steel-spring suspension the variables come down to steering boost, throttle sensitivity, and shift points.

The 2015 Audi A3 is only around 175 inches long; it's essentially the same wheelbase as the original 1996 A4, but about two and a half inches shorter. Furthermore, it's shorter than mainstream compacts like the Chevrolet Cruze, Honda Civic, or Ford Focus sedan. So it's a tidy, very city-friendly small car. But looking around the cabin, there isn't a whole lot of space behind the front seats—you'd better be ready to haggle with those in the front seat, and headroom is limited back there. Furthermore, the trunk is tiny, at just 10 cubic feet.

MUST READ: Road Rage Is The New Facial Recognition Frontier

Comfort is adequate from the front seats, but these aren't the superb, super-supportive seats of Audi's larger models. The lower cushions of the seats in the A3 (even those of the available sport seats) are surprisingly short—not what we expect from a European car—and we found that the hard edges next to the forward portion of the center console dug into the sides of right knees, bothering not just taller drivers like this one but average-height drivers as well.

Power seats are included for the driver only, and you won’t see ventilated or cooled seats, or a heated steering wheel, anywhere on the options list (these two latter items are pretty common on option lists nowadays, but it seems like nearly all smaller luxury sedan buyers have to deal with more compromised, manual passenger-seat adjustments).

After a few hours pushing the A3 quite hard through a narrow, challenging route of backroads, rising from the area of our offices in Menlo Park, weaving down to Santa Cruz and back, we'd reached two conclusions. The new A3 feels almost incredibly sturdy, strong, and precise as you drive it rapidly. That's all enhanced by precise, well-weighted steering (plus feedback that, while dull, is more vivid than most), and excellent body control. This car's new MQB architecture is promising, and we're eager to see what the upcoming S3 can deliver in U.S. guise.

The Haldex clutch pack system in the A3 is, by the way, a big advantage for gas mileage compared to the larger A4, where a planetary gear-based system sends power to the rear wheels all the time. We saw in the range of 26-27 mpg in a quattro model hammering hard through hilly, curvy two-laners.

On the other hand, cabin refinement meets the minimum that one might expect of a premium-brand small car, but we wouldn't go so far as to call the A3 especially quiet or refined. There's also quite a bit of road roar in the cabin, and you feel the coarse thrum of the engine as you're lugging along at city speeds; the engine vibrations aren't as isolated away as in a Mercedes CLA—or a Buick Verano, for that matter.

Too much razzle-dazzle, not quite enough refinement?

Lending one more critical eye to the presentation of the interior, the brightwork felt downright excessive (there's a lot of dazzle from it on a bright day). And we’re a bit disappointed in that the new design includes an only partially used horizontal row of buttons right in the center of the dash, above the climate control—leaving some blanks even on well-optioned cars.

The car that we spent the most time in was definitely not cheap. With all the major packages, it was optioned up to a grand—borderline obscenely grand—total of $43,540, which gets you the Prestige Package (Bang & Olufsen sound, MMI Navigation Plus, MMI Touch, Audi Connect, parking sensors, a rearview camera, side assist, full LED headlamps, and S-line trim), as well as a Sport Package (Audi Drive Select, sport seats, shift paddles), plus $550 Glacier White (read: white) paint.

Then we started asking questions that Audi would perhaps hope that we'd not—like would we rather have a $27k Subaru WRX over this nearly $44k A3 we were driving? Or a $48k CLA 45 AMG? Or just a well-optioned BMW 320i? And if compact luxury and comfort were the priority, would we be happier in a loaded $30k Verano?

For that matter, if all-wheel-drive isn’t so important and you’re thinking about getting the front-wheel-drive A3, we think you should take the Jetta GLI for a drive (we did some weeks ago, and would have trouble reconciling the price difference for a driving experience that's nearly as satisfying).

A stepping stone into luxury, in need of a little more charm

What it all adds up to is a very pleasant car that’s a capable performer, and for the most part a grown-up, elegant pick among small cars. If you've never been in an Audi, the A3 strikes us as a valid stepping stone, to a brand that has more cachet than VW. But those who've previously driven A4s are bound to be a bit disappointed once they've gotten over the oohs and ahs of the A3's connectivity and infotainment. The A3 is somehow lacking the charm and class (and refinement) that Audi's A6 and A8 sedans—as well as the current A4—possess in a royal flush.

There are, however, plenty of people in the world for whom the cachet of those four rings on the grille raises the value by a few grand.

So be it. While that A4 (Audi 80) Sedan that arguably made Audi what it is today pushed the brand (and the market) in a new direction with respect to design and expectations, the 2015 Audi A3 feels less like the breath of fresh air, and more like a careful calculation on the way to sales goals.

With one very smart calculation in the middle of the dash, we'll concede.