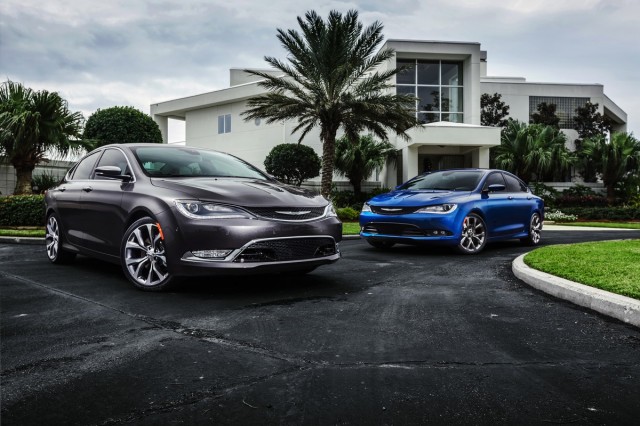 Family sedans are mission statements, everything a car company can do well in one package. Just to make it on the family radar, these four-doors have to look good, seat at least four adults, and sport a good track record for safety and reliability.

The Chrysler 200 is new this year, and it replaces a car family fairly unloved by real-world car shoppers, one tolerated by fleet buyers. The last 200 was was smaller, less refined, less ambitious than just about anything in the segment. As a result, the new 200 doesn't have to excel at much to blot out those humdrum memories.

On a few levels, it does just that. It's a slightly roomier, more glam counterpart to the slow-selling Dodge Dart, with which it shares its core.

As a mid-size sedan with the people-carrying, driver-delighting capacity of a Ford Fusion, Honda Accord, Mazda 6 or Nissan Altima, it's at a disadvantage. It's pretty and quiet, but the Chrysler 200's back seat is less hospitable than in the Altima or Accord, and its handling is more middle-of-the-road than the Fusion or the 6, despite some bright points of power and control. 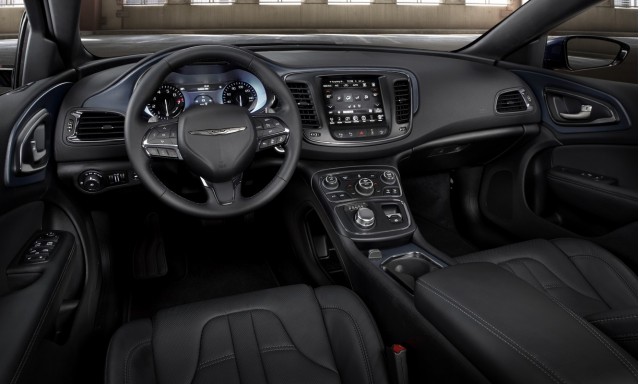 With the grain, against the grain


From just about any angle, the 200 is a pleasant-looking car, without much obvious linkage to the Dart. The sheetmetal relaxes over the cabin, draped versus the tautly pulled look of the Dodge. It's rounded and smooth, with a slim grille that resembles the last few Saabs, minus the floating winged badge front and center. The prettiest details mimic the roofline of the Audi A7 and Ford Fusion, and the downturned shoulder line drops to the rear with the same effect, less pronounced, as in a Hyundai Elantra.

Handsomely tapered and with an elongated roofline, the 200 also has some long overhangs that read like what it is: a larger car built on a compact wheelbase. All versions except the Chrysler 200 S have bright trim around the windows, with the S wearing gloss black instead, and all have LED taillamps, with LED running lights and fog lamps available.

The stunning cabin is convincing in its quality, and the split between dash and console highlighted by some unusual trims in more expensive models. Chrysler is drawing and building some beautiful interiors, and the 200 takes its place on their greatest-hits list. The gauges and center display float together in a sleekly curved cut-out from the soft-touch dash, and trimmed in attractive colors and grains, including an open-pore wood on the 200 C that's simple and beautiful.

The lower controls--including a rotary shift knob and big dials for volume and air speed--are laid on a separate plane atop a console with open storage beneath, a la Volvo, and the console has a slide-back portion under the cupholders that reveals charging and power ports. The details speak to lots of attention and time: there's an embossed Detroit skyline in the under-console on its protective rubber mat, there are volume and seek controls on the back of the steering wheel, even a natty interior trim with black surfaces, blue piping, and a blue cast on the dash trim.

It's finely furnished in front, but the Chrysler 200 doesn't have the rear-seat comfort of the best of the best sellers in the mid-size segment. It's a car that cannot seem to shake its almost-compact dimensions, despite being down only an inch or a fraction from some of its biggest targets.

The 200 is inescapably close to the Dodge Dart, in terms of interior space. The 200 sits on a 108.0-inch wheelbase, and has 101.4 cubic feet of passenger space. The Dart's wheelbase is only 1.6 inches shorter at 106.4 inches, and it has just 4.2 fewer cubic feet of passenger space, at 97.2 cubic feet. At 3,473 pounds it's heavier than a base Fusion or Sonata, which have better-arranged rear-seat space, or even a Cadillac ATS, which doesn't.

Sit into the driver's seat, and the 200's packaging shows its front-seat bias. The sport seats fitted to the two test cars we drove around metro Louisville had good bolstering and adjustment.  Knee room is good, but the Chrysler 200 sits lower than the Dart, so taller drivers will see as much of the 200's headliner as they will of the road ahead.

The back seat is a place for small adults and teenagers sized for a generation or two ago. It's more of a chore to fold in half, and climb through the short door openings, than it is in any of the best-selling mid-sizers. Folding and unfolding into the back seat, it seems worse than in some "four-door coupes". The 200 has 37.4 inches of rear-seat head room at its highest point: it's a competitive number, but it's clear that the peak comes well forward of where it does on cars like the Fusion or Altima.

Given those metrics, it's a good thing all 200 sedans have a 60/40-split back seat with a trunk pass-through. The trunk is generous at 16 cubic feet, and elsewhere, the storage solutions are solid. An iPad will fit in the center console, and that slide-back tray in the console lets power cables drape in a few ways. There's no clever under-seat storage like there is in say, a Dodge Journey--the space is used to package other features.

And as we've suggested, the 200 might have one of the best interiors in this segment. The doors don't close with a nice damped noise, but the materials look and feel fine. The 200's premium treatments are a warmer, classier place than the Lincoln MKZ, skipping right by the even more coolly styled Ford Fusion interior. We'd be even more positive about the 200's cabin if it didn't have Malibu-sized accommodations in back. 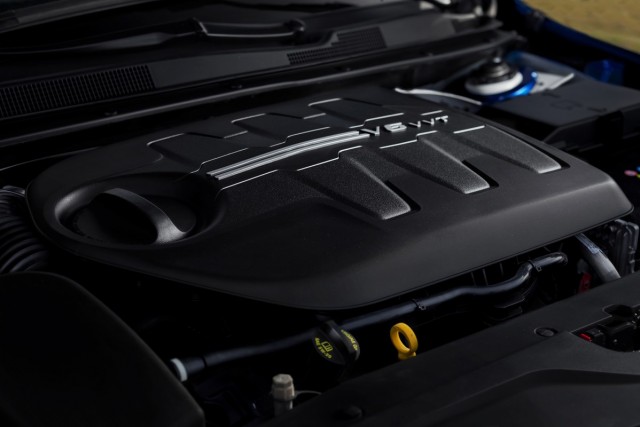 For driving pleasure, few mid-size sedans comport themselves as well as a Ford Fusion or a Mazda 6, with the Accord and Passat playing pretty nicely, too. The Chrysler 200's V-6 option is a big gun to bring to that fight--maybe too big.

The standard configuration for the Chrysler 200 pairs a 2.4-liter four-cylinder engine with a nine-speed automatic--a combination also found in the 2014 Jeep Cherokee, another vehicle spun from the same Dart/200 architecture. It's good for 184 horsepower and 173 pound-feet of torque, and it's better than acceptable in terms of power delivery through the automatic--which, in this case, slides between "D" and "L" modes without any precise driver control over gears. It's not difficult to drive it smoothly, since it's always optimizing acceleration for fuel economy, and there's less of the gearhunting that goes on with the same combination in the Cherokee. For a powertrain driven more by fuel economy and pricing, it's more than adequately smooth--though we suspect it'd be less so without the optional acoustic glass that can be had with 200 S and 200 C sedans.

Chrysler sees its optional 3.6-liter Pentastar V-6 as a key to the 200's potential sales success. It makes 295 hp and 262 lb-ft of torque in this application, and it's absolutely one of the best performers in the class. The caveat: with front-wheel drive, the V-6 has copious torque steer, the likes of which we haven't felt since Saab shuffled off its mortal ignition coil. It's potentially cured by the 200's optional all-wheel-drive system, which can send up to 60 percent of the torque to the rear wheels, but we weren't able to test that model.

READ: 2014 Subaru Forster: Six Reasons It's Among The Safest Crossovers

The upside to ordering the V-6 in either FWD or AWD form: the nine-speed gets paddle shifters that can actually command gear changes at the driver's will. The stubby, cold-metal nubs tap into all the Pentastar's good vibes, while revealing some of the nine-speed's lumpier shift qualities--it surges forward on upshifts, and it really takes a few gear changes to change its gear ratio in meaningful ways. The rotary shift dial also enables a sport mode that gives the 200 another talking point in the driving-dynamics discussion, upping steering weight and moving the shift points higher.

On the road, the Chrysler 200 slips into a zone somewhere along the Malibu, with nice but unremarkable handling. The Altima does the best job of anonymizing road surfaces and road noises; the Fusion's wonderful for calling them out and making them a part of its fun. The 200 does its best to tamp down the worst of the road without really encouraging a side trip to one of Rand McNally's lesser-known routes. We spent most of our driving day in a 200 S V-6, finding that the basic setup of front struts and rear links meets its match with the heady acceleration of the V-6 and what that does to the driver's ego. There's new body reinforcement under the 200 to relieve it of some front-end twist and shimmy, but there's still remnants of its compact-car roots here, too. It finds its bump stops frequently on semi-challenging roads, and the all-season tires damp out some pretty objectionable ruts while also damping out finer responses. It's smooth enough and the steering feels quick enough in everyday-style driving, but its attention drifts as you get further from center.

Fuel economy numbers aren’t out yet, but Chrysler says that with the most popular powertrain combination—the four-cylinder, front-wheel drive—the 200 will meet or beat a 35-mpg EPA rating on the highway. That’s with a 0.27 coefficient of drag, and with active grille shutters. A Hyundai Elantra is rated from 38 mpg highway, while the much larger Nissan Altima four-cylinder earns a 38-mpg EPA highway rating.

Neither the NHTSA or the IIHS have crash-tested the 200 yet, but it will offer new features like a driver knee airbag in its quest for great crash-test scores like those won by the Dart. Blind-spot monitors and parking assist are among the new safety features.

The base 2015 Chrysler 200 LX is priced from $22,695 including destination, pitting against the most affordable mid-size sedans like the Altima. The 200 LX has air conditioning, a full-length console with sliding armrest, overhead storage, keyless entry, LED ambient interior lighting, a tilt/telescopic steering wheel, an auxiliary input jack, and USB connectivity. Bluetooth connectivity is available on the LX, but features such as a rearview camera or satellite radio or rear heat ducts are not offered, at all.

The $24,250 Limited models step up to alloy wheels and an audio upgrade, and can be optioned up with packages that include dual-zone climate control, remote start, heated mirrors, a heated steering wheel, a rear backup camera, satellite radio, a power sunroof and 18-inch wheels, among other features.

The $25,490 Chrysler 200 S models get a sportier look, plus fog lamps, heated mirrors, 18-inch wheels, a sport suspension, and other upgrades. Options include the V-6, all-wheel drive, a panoramic sunroof, 19-inch wheels, and navigation.

Top $26,990 200 C models heap on additional features that include a garage-door opener and upgraded materials and trims—and they can be optioned with packages including HID headlamps, LED fog lamps and running lamps, ventilated front seats, the open-pore wood interior, and a SafetyTec package. Options are very similar to those on the 200 S.

Chrysler's excellent Uconnect infotainment systems come in different flavors across the lineup. The base 200 LX comes with an AM/FM radio and an LCD readout, period--making the 200 one of the first mass-market vehicles to drop the CD player from its audio features. At the top of the Uconnect ladder is a version with an 8.4-inch touchscreen; Bluetooth; satellite and HD radio; navigation; and app connectivity for everything from music streaming to voice-to-text messaging.