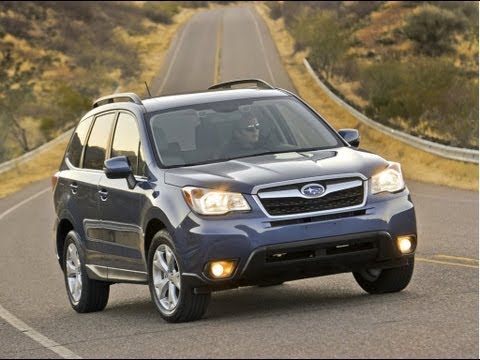 At one month into our 2014 Subaru Forester XT Six-Month Road Test, we're pleased to report we've settled into an easy rhythm with our Best Car To Buy 2014. It's one of the most versatile wagons we've ever driven--a gaping maw to stuff with household goods or charity donations one day, a perky little turbocharged sport wagon to thread through Appalachian interstates the next.

And it's pretty stingy on gas, too. The Forester's turning in a solid 24.4 miles per gallon so far, and has soldiered on at that level through two 750-mile 80-mile-per-hour road trips, with two more to come in the next few weeks.

We're suitably nestled, but maybe you've missed our extensive coverage so far on this latter-day 240DL. Before we hit the road again, we'll take this week's update to bring you up to speed on the Forester. Let's start with the basics:

Our comprehensive look at the Forester points out all the worthwhile changes that have brought Subaru's compact crossover ute into the mainstream. The Forester gets much more appealing styling, more comfortable seats and higher-grade interior trim, and new and useful driving aids and safety electronics.

Last fall, we named the Forester our Best Car To Buy 2014, from a tightly competitive field including the Cadillac CTS, Acura MDX, and Kia Soul. The Forester earned a TCC Rating of 8.4, and we gave it the nod over the pricier vehicles just making our $50,000 price cut. Why? "It's no longer an oddball niche wagon," we wrote. "Instead it's a fully sorted, thoughtfully designed vehicle in nearly every respect."

In-house, we call these pages "ubers"--a single page to bookmark for everything we publish on a single model. On these pages you'll get a history of the nameplate and vehicles wearing the badge; see our how our ratings for a vehicle have changed over time; get links to our latest news posts; see data on crash tests and recalls; and most importantly, find listings for new Subaru Foresters for sale across the country, from our database of more than 3 million listings.

We've also had ample time to get in-depth with the Forester around the world--and on familiar turf. Here's where we've piloted our Subie so far:

Where else would we hammer around in the granola crowd's go-to gas hog? Portlandia, of course. Our video crew puts the Forester through the paces, and found that it's more comfortable and more efficient--and maybe even a little fancy for diehard Subie fans. Also, there may have been Voodoo doughnuts involved.

We also took part in Subaru's major media launch of the Forester here in the U.S., and called it "an official coming-out to the mainstream," an evolution that made the Forester "at last, a direct rival again to the likes of the RAV4 and CR-V, as well as the Ford Escape and others."

Before that drive, we'd had a chance to sample the Forester overseas, on a preview drive in Japan. The technical backgrounder and early turn at the wheel left us with a clear take: "at last, fits into the mainstream. And before you pass judgment, we think that’s a good thing."

And in other news, we've also staked out some head-to-head comparisons we have on the docket through the summer. The Forester's no longer a niche vehicle--and that means some brutal competitors have lined up to take it on:

In our full review, we initially compared the Forester to cars like the Ford Escape and the Honda CR-V. As we've racked up the miles, a few more vehicles have been drawn into the gunsights--the 2014 Jeep Cherokee first and foremost among them.

A quick look at the TCC Rating for the Cherokee reveals the Forester has a clear edge. The 2014 Jeep Cherokee plants a foot in both the crossover and SUV world--and only flubs the styling. Both are safety standouts, but the Forester's versatility and visibility are trump cards that beat out Jeep's superior UConnect infotainment and Trailhawk edition.

Subaru Forester Vs. Subaru XV Crosstrek: Which Crossover To Buy?

Of course there's competition inside Subaru, too, with Subaru's handy new compact XV Crosstrek. Our conclusion: "If you need a smaller car that still offers all-wheel drive and more ground clearance than a regular compact to handle rough roads, the XV Crosstrek is for you. The Forester, on the other hand, is larger but offers more interior space and a nicer interior--and we found it smoother, quieter, and more pleasant at highway speeds."

The Forester's been the subject of one recall already--a minor action for curling floor mats--but so far, our experience has been without flaw.

In the coming weeks, we'll talk about the Forester's safety systems, what we're learning about adaptive cruise control and the future of autonomous driving, and hit the pavement for some epic stretches of Americana. We'll update you regularly on fuel economy, car seats, and with other tasks to see if we've missed anything in naming the Forester our Best Car To Buy.

Follow along for the ride--and connect with us below if you have a task or a question in mind for our six-month test.