Alfa Romeo 4C Going To Maserati Dealers After All (And A Few Fiat Showrooms, Too) 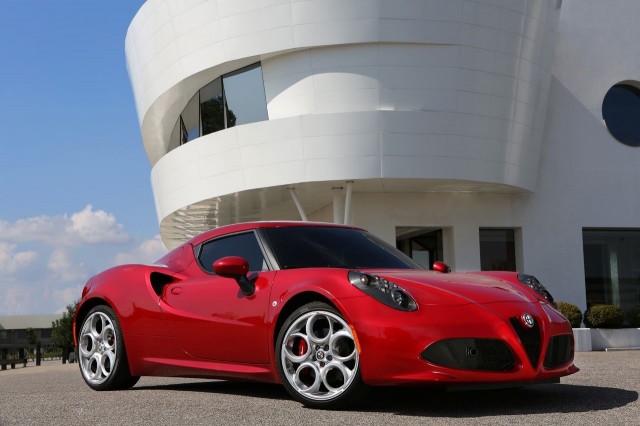 Among Chrysler CEO Sergion Marchionne's greatest ambitions is bringing Alfa Romeo back to the U.S. after a two-decade hiatus. The brand's first 21st-century assault on North American shores will be led by the highly anticipated Alfa Romeo 4C.

We know a good bit about the 4C's arrival schedule (mid-2014, for now). There's even been a good bit of speculation about the sporty model's price ($54,000-ish). What hasn't really been revealed is where the 4C will be sold. Now, according to Detroit News, the matter has been settled. Well, mostly.

When news of the 4C first broke, we naturally assumed that it would be sold at Maserati dealerships. Then we were told, "no, it's coming to Fiat showrooms". So, which is right?

Marchionne says that the 4C will debut at Maserati dealerships. However, a few will go to high-selling Fiat dealerships -- though the company hasn't announced which ones. The model is apparently still on track to arrive by June 30.

As a brand, it's logical to pair Alfa with Maserati: they're both sporty lines, they're both luxurious and aspirational, and now, with the $67,000 Maserati Ghibli, there's some price parity between the brands, too.

On the other hand, Maserati dealerships are few and far between. If Marchionne were to leave the 4C there, it wouldn't be seen very often by mass-market shoppers, which is important -- not only for brand awareness, but also because Alfa Romeos are more affordable and should, in theory, sell in higher numbers. To achieve those numbers, though, Alfa needs to make a splash with as many consumers as possible.

Of course, it's important to remember that the 4C won't be a big seller, no matter where it's shown. It's a limited edition, and only about 1,000 of the 2,500 produced will come to the U.S. But that makes it a perfect "halo car" -- desirable but elusive. Spreading those 1,000 units to as many dealers as possible could give Alfa Romeo the big, splashy entrance it needs to make inroads in America.