J.D. Power: Vehicle Dependability Drops For The First Time In Over 15 Years 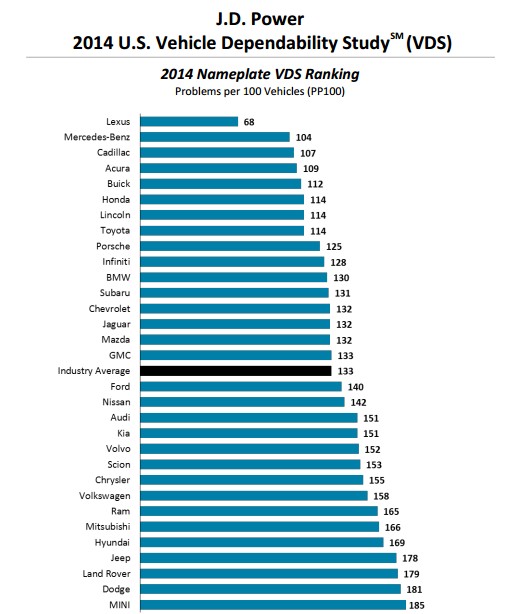 America's auto industry has been on a roll recently, boasting stronger sales, better-built cars, and higher approval ratings from customers. That makes J.D. Power's latest Dependability Study all the more surprising, since it shows that vehicle dependability has dropped for the first time in more than 15 years.

As always, Power's Dependability Study looked at vehicles that were three model-years old -- in this case, vehicles from the 2011 model-year. Between October and December of 2013, Power interviewed 41,000 original owners of those vehicles, noting the number and types of problems that the vehicles experienced during the previous 12 months. Power then calculated the number of problems per 100 vehicles (aka PP100). Obviously, the lower that score is, the higher the quality rating.

In 2012, dependability hit a record high, as the auto industry averaged 126 PP100. For this year's study, however, Power found that vehicles in their third year of service averaged 133 PP100, a six percent uptick. The last time dependability took a hit was 1998.

Power's David Sargent notes that much of the dependability problem can be attributed to the smaller engines and new-tech transmissions that automakers began rolling out during the 2011 model-year. In particular, four-cylinder engines -- deployed for a variety of reasons, including improved fuel economy -- caused significantly more problems than their five- and six-cylinder counterparts. Diesels also proved troublesome. According to Sargent:

"Automakers are continually looking for ways to improve fuel economy, which is a primary purchase motivator for many consumers, particularly those buying smaller vehicles However, while striving to reduce fuel consumption, automakers must be careful not to compromise quality. Increases in such problems as engine hesitation, rough transmission shifts and lack of power indicate that this is a continuing challenge."

Not surprisingly, luxury marques dominate the top rungs of Power's 2014 Dependability rankings. However, the top scores are divided fairly evenly across American, Asian, and European brands, with Lexus, Mercedes-Benz, and Cadillac coming in at #1, #2, and #3, respectively. (Though it bears mentioning that Lexus far, far outscored every other brand, with just 68 PP100, compared with Mercedes' 104 PP100.)

At the very bottom of the barrel, there's MINI, with 185 PP100. (It's worth noting, however, that MINI customers remain very satisfied with their dealership experience -- which is probably a good thing, since they visit their dealers so often.)