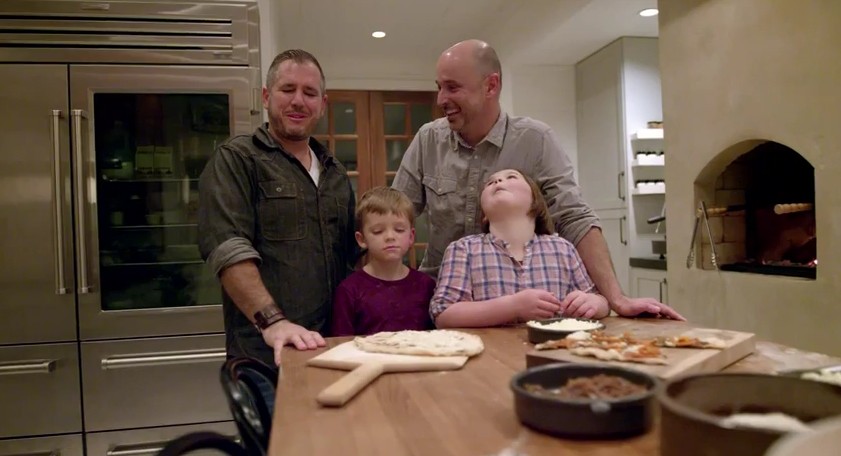 At noon Eastern, Chevrolet unveiled two commercials on YouTube: one for the all-new Chevy Traverse, the other for Chevrolet, the brand.

"Why should that matter?", you ask. "Don't automakers post clips to the web on a daily basis?" They do, but these are special: they're intended for TV, and they include images of LGBT families and same-sex weddings. According to an email from Chevy's communications team, this is "a first for Chevrolet in a television spot".

That in itself may not seem like much of a big deal, either. LGBT characters, spokespeople, and families are increasingly common in ads, movies, TV programs, and everywhere else. Plus, Chevrolet's parent company, General Motors, is a longtime supporter of LGBT rights, earning perfect scores on the Human Rights Campaign's Corporate Equality Index. So, is it really that surprising that Chevrolet would drop some LGBT-friendly imagery into a couple of TV commercials?

What moves this from the category of "banal" to "ballsy" is the timing: the two clips will debut on television tonight, during the broadcast of the Winter Olympics in Sochi, Russia. Unless you've been living under a rock, you probably know that Russia and its president, Vladimir Putin, have taken lots of flack for the country's new laws that ban "gay propaganda". Those laws have been criticized for being unfairly vague, and Putin has been accused of creating a national environment in which homophobia isn't merely tolerated, but encouraged (like, say, Iran or Uganda).

In other words, these two ads are clearly meant to make a statement -- one declaring Chevrolet's unequivocal support for LGBT equality and criticizing the climate of homophobia being fostered in Russia and elsewhere.

This is also a savvy marketing move on Chevy's part. Many sponsors of the Winter Olympics have been attacked in the media for not speaking out against Russia's new laws. Now, a number of those companies -- including heavy-hitters like AT&T and Coca-Cola -- have begun making statements in support of the LGBT community, and so far, public opinion seems to be on their side. Chevy surely hopes to be in that number, too.

You can see the clip for the all-new Chevy Traverse below, and the branding ad for Chevrolet below.