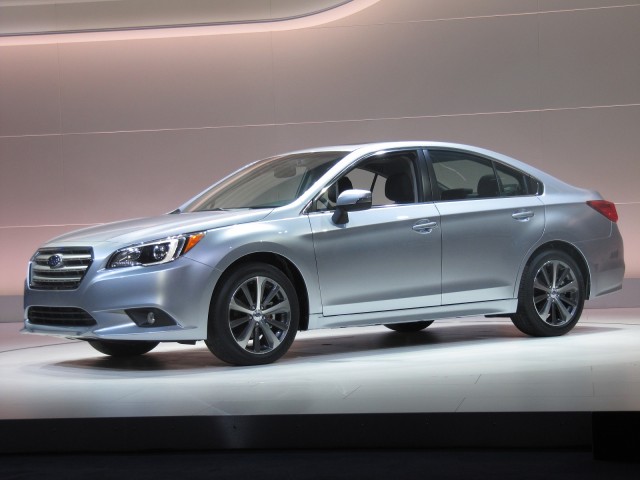 Subaru has revealed a completely redesigned 2015 Legacy lineup at the Chicago Auto Show. And while the all-new version of Subaru's mid-size sedan is by no means radical in its design, a quieter, more refined ride, improved gas mileage, leading-edge active-safety features, and some serious infotainment upgrades all help put the Legacy in the thick of things—against sales heavyweights like the Honda Accord, Toyota Camry, and Ford Fusion.

Of course, Subaru hasn't forgotten about the basics; all 2015 Legacy models again include all-wheel drive, and the system has a new torque-vectoring system that should make it, we hope, better than ever. And fuel economy numbers have risen—to 26 mpg city, 36 highway, for the 2.5i (four-cylinder) versions.

ALSO SEE: With Obesity On The Rise, Do Seat Belts Need To Be Longer?

With the addition of new rear radar hardware and an improved camera, Subaru's suite of active-safety features and its EyeSight driver assistance system have been improved and expanded. And perhaps what we'd appreciate most on a daily basis are the better infotainment systems. Subaru has at last moved into the world of modern infotainment, and we're glad to see the day.

The new Legacy, of course, foretells some of the features and changes—and the design direction—for the new 2015 Subaru Outback that's due at the New York Auto Show in April. Together, the Outback and Legacy add up to well over a third of Subaru's annual sales.

Visit our 2015 Subaru Legacy preview page for more information, then take a look at the galleries here. And be sure to head over to our Chicago Auto Show hub page at our sister site Motor Authority, for all the latest from the Windy (and snowy) City.