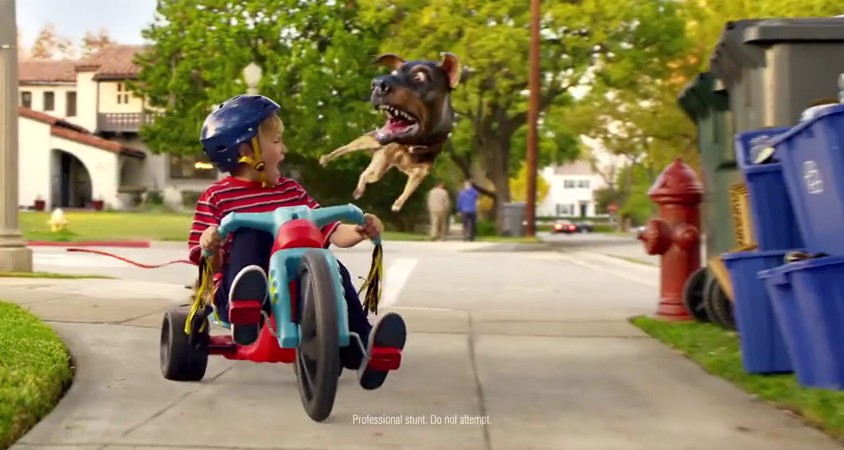 Last week, Audi and its parent company, Volkswagen, posted teasers for their upcoming Super Bowl ads. Now, the automakers have revealed their official game-day spots, and though the two aren't technically competing against one-another, there's still a very clear winner.

Undoubtedly, that winner is Audi. Its new "Doberhuahua" commercial, dreamed up by the creative team at Venables Bell & Partners, picks up where the first clip left off, giving us a better look at the mythical offspring of a Doberman Pinscher and a Chihuahua. As you'll see in the video embedded above, pandemonium ensues as hordes of the hybrid pup wreak havoc on city-dwellers.

As we'd guessed, the clip is an ad for the Audi A3. Despite the commercial's message that compromise is bad, the image of a Doberman's personality paired with a Chihuahua's pint-sized stature is a nice metaphor for the small, feisty A3.

For starters, the clip has little to do with the teaser VW released last week (though admittedly, there are buttoned-up, lab-coated German engineers in each).

But most disappointingly, the ad's concept is lackluster. As you can see from the video embedded below, the central premise is an uninspired riff on the movie It's a Wonderful Life and its proposition that every time a bell rings, an angel gets its wings. Just for kicks, the creative team threw in a couple of below-the-belt jokes -- because, you know, Super Bowl and dude humor.

Admittedly, Volkswagen has a different brand than Audi -- one that's more populist and less edgy. But as VW has proven many times in the past, "populist" doesn't have to mean "dull". Except in this case, it does.