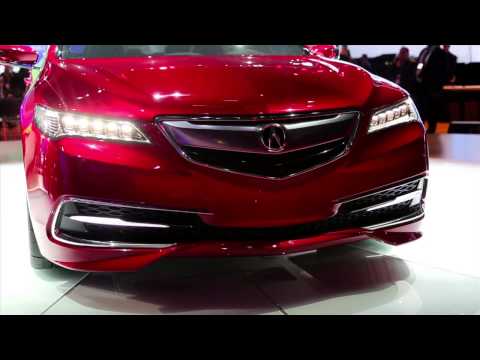 Next year, the Acura TL and TSX both go away. Honda's upscale brand is getting itself un-confused in the mid-size class, replacing both with the new 2015 TLX sedan.

Acura promises the new sedan will be more sporty, more advanced, and a more logical fit between the compact ILX and large RLX sedans. From our first look at the TLX at the 2014 Detroit auto show, we think they're headed in the right direction.

Acura says the new TLX has a more athletic appeal. It's certainly more up to date than either of the two cars it replaces, with some heavy resemblances to Lexus' mid-size ES. The overhangs are shorter and overall it's not as long as the former TL, but the wheelbase is the same length, which means the five-seat rating should carry over.

Powertrains weren't completely revealed (the TLX Prototype didn't even have a functional interior), but it's known that the TLX will sport revised versions of today's Honda 2.4-liter four-cylinder engine and its 3.5-liter V-6. The four-cylinder should be rated at more than 185 horsepower, and it will be coupled to a new eight-speed dual-clutch transmission with a torque converter, an unusual pairing that could relieve some of the choppy shift quality of some dual-clutch boxes.

The six-cylinder is expected to be rated at 285 hp or more, and it's coupled to a new nine-speed automatic. Front-wheel drive is standard, while Acura's torque-vectoring all-wheel-drive system will be an option.

One cool feature for the 2015 TLX will be Acura’s an Integrated Dynamics System (IDS), which allows the driver to adjust things like the response of the throttle, electronic power steering and all-wheel-drive system. Modes will include ECON, Normal, Sport and Sport+.

Stay tuned for a first drive of the 2015 Acura TLX later this year. In the meantime, take a look at the Detroit video, and for more from the 2014 Detroit Auto Show, head to our dedicated hub.