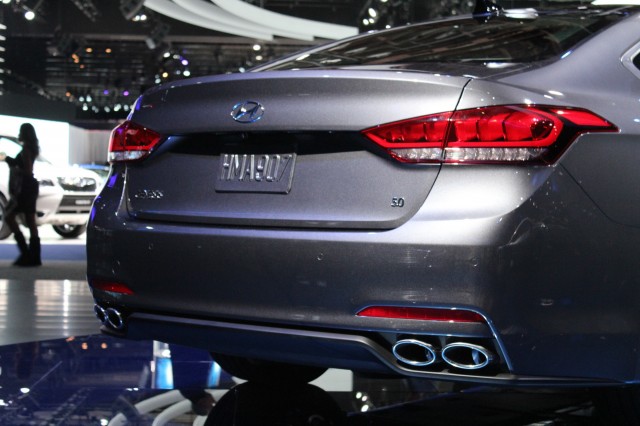 The 2014 Detroit Auto Show brought a sense of deja vu to the Hyundai stand. In 2009, the Korean carmaker introduced its luxury Genesis sedan to Detroit crowds. This year, it's shown off the second-generation Genesis, and promises a few leaps and bounds forward on the luxury and infotainment fronts, as well as in handling.

Hyundai says the Genesis is the first vehicle to show off the evolution of its "fluidic sculpture" design language. It's smoother for sure, with elements of sleekness like those on the Audi A7 and BMW 7-Series, from the big framed grille to the plump haunches. The badgework owes something of a debt to Bentley, too, but the interior is all its own, a tasteful diversion from the overt Lexus cues of the first-gen car.

For the U.S. market, performance will come from a choice of six- and eight-cylinder engines. The 3.8-liter V-6 is rated at 311 horsepower, while the 5.0-liter V-8 is good for 420 horsepower. An eight-speed automatic is standard.

The Genesis remains a rear-driver, but a new HTRAC all-wheel-drive system is offered for the first time, giving Hyundai a better shot at drivers in the northern tier of states--a move that's helped Jaguar grow its sales strongly this past year. Hyundai's system can split torque dynamically from the front to rear axles, with driving modes that accommodate varying levels of grip.

The 2015 Genesis has a wheelbase almost 3 inches longer than before, giving the rear seat more space. Materials are improved over the prior version, and so is connectivity. The main 9.2-inch touchscreen display is mounted in the dash, and the driver controls its functions via its next-generation Blue Link telematics and infotainment system, which features Apple Siri voice-activation and Eyes Free as well as Google Maps navigation services and Google Glass integration.

The Genesis goes on sale later this year, with a base price starting under $40,000.

For more, see our full 2015 Hyundai Genesis preview. To see what else will be on show at the 2014 Detroit Auto Show in January, head over to our dedicated show hub.