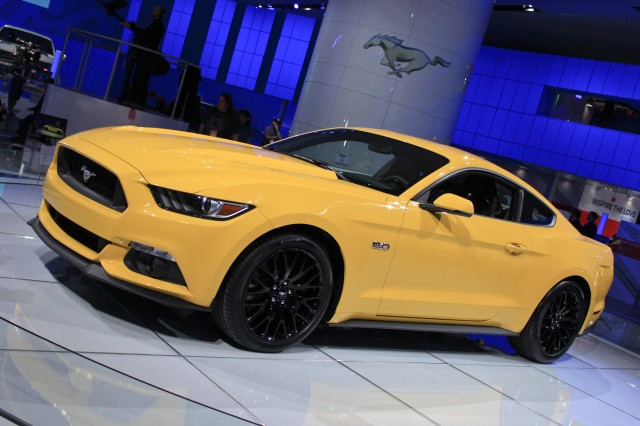 The new 2015 Ford Mustang wasn't the company's biggest introduction at the 2014 Detroit Auto Show--those honors would have to go to the aluminum-intensive 2015 Ford F-150.

But with 420 horsepower in GT form, a sleek new body, and an independent rear suspension, the Mustang may be better than ever.

In this first-look video, we take in all the Mustang's new curves. Both as a fastback and as the upcoming convertible variant, the Mustang's sculpted hood, short rear deck, and its tri-bar taillamps hit all the usual Mustang highlights, but in a heftier, almost BMW 6-Series way. The lower stance does it a lot of visual favors, as do its wider rear fenders.

The highlight of the new Mustang undoubtedly will be the new chassis. Ford [NYSE:F] says the new independent rear suspension will make even the base 'Stang dynamically better than the last-generation car's Boss 302 special track edition.

That base Mustang will be powered by a new 3.5-liter V-6 with about 300 horsepower. In the middle of the lineup is an intriguing new option--a latter-day SVO, maybe, a 2.3-liter turbocharged four-cylinder with 305 hp.

At the top end, the Mustang GT continues with a 5.0-liter V-8, which now features an upgraded valvetrain and cylinder heads that yield more than 420 horsepower and 390 pound-feet of torque.

On any model, the rear-drive Mustang offers a choice between six-speed manual and automatic transmissions. Transmissions with more gears are also expected.

There's more news to come with the Mustang as it approaches its 50th anniversary on sale at this year's New York auto show, on April 17, 2014. Watch our preview video here, and stay with The Car Connection for more details, and for a first drive later this year.