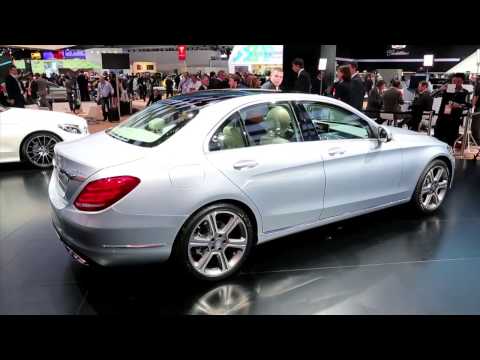 The 2015 Mercedes-Benz C-Class is closer than ever to being a mini-E or mini-S-Class, and it's not just because of its latest growth spurt. The latest C has its most evocative styling ever, and an interior that's nothing short of beautiful.

The 2015 C-Class also is more powerful, lighter than before, and packaged at first with standard all-wheel drive.

On the stand at the 2014 Detroit auto show, Mercedes revealed its newest American citizen. The new C-Class will be built in Alabama alongside the M-Class--which makes us wonder how long it will be before the GLK-Class ute joins the lineup there.

The more suggestively styled exterior scales down the curvature of the latest S-Class, and broadens its nose with either the Luxury model's big grille or the Sport's big three-star logo. But it's inside that it works the best, with a much more detailed environment than any C-Class before it, and lavish applications of wood and aluminum that envelop parts of the interior, swallowing them whole.

Under the hood of the new 2015 C-Class, you'll find one of two engines. The C300 sports a 235-horsepower, 273-pound-foot 2.0-liter turbocharged four-cylinder. The C400 has a 329-horsepower, 354-pound-foot 3.0-liter turbocharged V-6. Both are turbocharged and direct-injected, and both team with a seven-speed automatic transmission. Mercedes fits its 4Matic all-wheel-drive system as standard for both versions for the 2015 model year, but more economy-minded and sporty variants with rear-wheel drive are to be expected.

Base cars have conventional steel suspensions, but the air-sprung Airmatic setup is now available on the C-Class, for performance and fuel-economy reasons. Models fitted with the adaptive air suspension can choose from Comfort, ECO, Sport, and Sport+ modes via the Agility Select switch.

In all, the new C-Class drops 220 pounds, mostly from a lighter, stiffer body structure. That hasn't stunted its growth, though. The 2015 C-Class is 3.7 inches longer, 1.6 inches wider, and has 3.0 inches more wheelbase than the previous model.

The C-Class adopts many of the safety technologies now new to the E-Class and S-Class. Attention Assist is among them, as is a forward-collision warning system that can stop the car from speeds of up to 124 mph. Options include lane-keeping assist, adaptive cruise control, and active parking, as well as a surround-view camera.

On the more entertaining side of the 2015 Mercedes-Benz C-Class's technology is the COMAND infotainment system, installed in either the standard 7-inch display or the optional 8.4-inch display offered as part of the Multimedia package. Mercedes' mbrace2 apps and connectivity technology is also baked into the COMAND system, with the option to have over twenty Mercedes Benz Apps integrated from the factory.

Stay tuned for a first drive of the 2015 C-Class this spring.