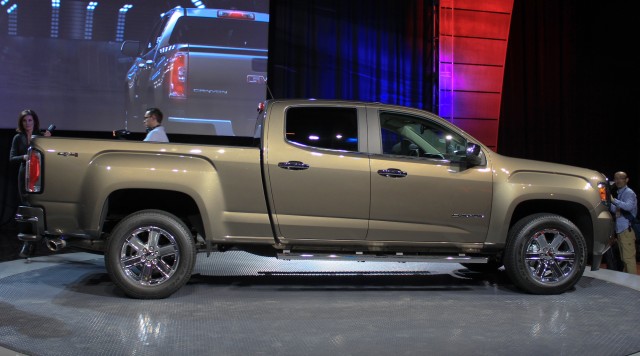 If you wanted a mid-size truck before this year, your choices were relegated to two brands: Nissan and Toyota.

With the 2015 GMC Canyon and its near-twin, the Chevy Colorado, there's new lifeblood in the segment, with an intriguing diesel option on the way.

The Canyon, like the Colorado, gets a slightly downsized version of its full-size companion's style. In this case the GMC Sierra is the donor. But the Canyon is by no means small: by comparison, it's about 70 percent as big as the full-size trucks of just a couple decades ago.

The looks are fairly orthodox, with boxy GMC fenders a call-out to other vehicles in its lineup. The window line curves slightly upward at the rear of the cab, giving the Canyon a flair more like the global trucks it competes with in other markets around the world--or the Toyota Tacoma and Tundra, take your pick. Inside, the look is upscale and beefy, with a console-mounted shifter and on most versions, a big color touchscreen for audio.

At launch later this year, the Canyon will come with a choice of two engines. There's a 193-horsepower four-cylinder, offered with either a six-speed manual or a six-speed automatic; the upgrade is a 302-hp V-6 with automatic only. GM says a turbodiesel six-cylinder is coming for the 2016 model year, in calendar-year 2015.

Either version will come with rear-drive, and available all-wheel drive. It's to be sold in either extended cab or crew cab styles, the Canyon comes with a choice of a 6’2” bed, or, for crew cab models, a shorter 5’2” bed. Other unique features for the 2015 Canyon include an EZ Lift-and-Lower tailgate with an internal torsion bar to damp and ease tailgate lowering and lifting; a CornerStep rear bumper design first seen on the 2014 GMC Sierra; 13 reconfigurable and 4 stationary load tie-downs in the bed; optional factory sprayed-in bed liner; and more.

Standard safety features include a standard rearview camera, trailer-sway control, and hill-descent control. As for infotainment, the Canyon can be equipped with 4G LTE connectivity; Siri Eyes Free Mode; GMC’s AppShop; and navigation.

The 2015 GMC Canyon goes on sale later this year -- but watch our preview video from the 2014 Detroit Auto Show for a first look.