VW Beetle Dune Concept: A Bug For The Desert Rat In You 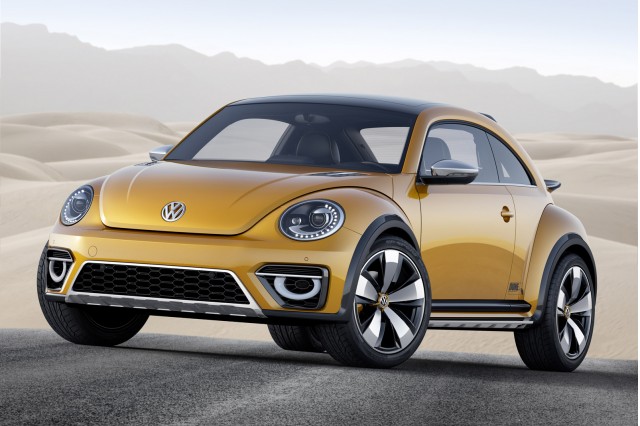 Is there a place in the world for a Bug outfitted for a cross-Sahara trek? At this year's Detroit Auto Show there was, at least in concept-car form.

VW’s lifted Beetle Dune Concept takes its cues from the off-pavement dune buggies of yesteryear, while previewing a look at what a go-anywhere version of the Beetle could look like in the near future. It’s a different take on the idea of a Beetle sports car–one that aims to accommodate the lifestyles of outdoor adventurers.

The Dune Concept sits two inches higher off the ground than the traditional Beetle, and it’s both longer and wider than the Beetle R-Line on which it’s based. However, it’s powered by the same 210-horsepower turbocharged four-cylinder engine and six-speed dual-clutch automatic transmission. It comes only as a front-wheel-drive model, with a multi-link rear suspension and the XDS electronic differential lock, intended for increased traction on less stable surfaces.

In keeping with the all-terrain theme, the Dune Concept wears a chrome-plated underbody skid plate, larger air intake, and the Dune logo. The skis are mounted to the car through a trick spoiler, which swivels to all storage within the actual wing. You’ll also find VW’s LED daytime running lights and xenon headlamps, as well as LED fog lamps gracing the face of the concept car.

Inside, the dash-mounted storage bin has been replaced by a grab-handle, and the interior is trimmed in soft-touch materials. The sport seats are covered in a mix of “Titan Black” leather and “Ceramique” tan fabric.

The infotainment system has been upgraded with “Volkswagen Sideways,” a feature new to VW products, that not only displays points of interest on the navigation screen, but also shows whether or not your friends are there.

VW claims that the Dune Concept is a “Baja Bug for the 21st Century,” mixing the brand’s sand-running past times with today’s modern tech. To us, it looks nearly ready for production. Or is that just wishful thinking?