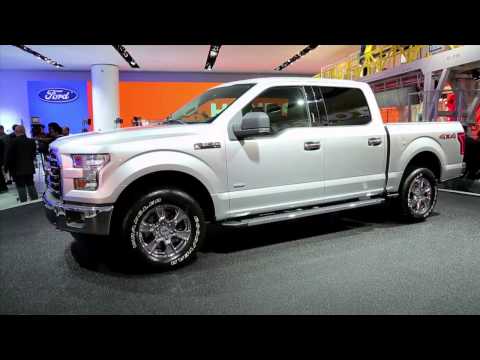 Ford Motor Co. [NYSE:F] has quietly dropped extensive details, as well as a few pics, of a completely redesigned 2015 Ford F-150, in advance of a Monday morning press conference to be held at the Detroit Auto Show.

To start, this bold redo of the longtime best-selling vehicle in the U.S. market looks packed with innovation—ranging from an even smaller turbocharged V-6 option, to LED headlamps and side spotlights, high-power outlets, and some industry-first truck applications of active-safety technology like blind-spot system and inflatable rear seat belts.

It's shed a lot of pounds, but should be able to haul as many

It’s innovative in the materials, too, as reports have suggested for several years. The 2015 Ford F-150, which officials say is completely new from the ground up, is built extensively of high-strength aluminum, applied to the entire cab, plus the front end, box, and tailgate—altogether saving around 700 pounds.

The pickup boxes themselves, Ford says, are larger than those of current F-150 models; yet they’re 70 pounds lighter. And the new fully boxed frame alone is 60 pounds lighter than the current frame.

For the underbody and frame, Ford also employs more high-strength steel than before, which should give this truck improved impact protection.

An even smaller EcoBoost V-6—higher mpg, too?

While the largest-displacement engine from the current model line, the 6.2-liter V-8, has been dropped at this point, a new 2.7-liter EcoBoost (turbocharged) V-6 engine joins the lineup, while the 3.5-liter EcoBoost V-6 and 5.0-liter V-8 carry over. Separately, a new 3.5-liter naturally aspirated V-6 functions as the base engine for the lineup, which entirely gets six-speed automatic transmissions. The rolling chassis otherwise bears no surprises as great as the materials up above; with its front coil-on-shock and double-wishbone setup, and Hotchkiss-type live setup with leaf springs in back, it’s all conventional. Steering is handled by rack-and-pinion gear, with electric boost, and there are four-wheel vented disc brakes.

Ford says that the new construction and design was extensively tested, including in endurance-oriented off-road racing. A disguised 2015 F-150, for example, was run in the 2013 Baja 1000.

After taking in the level of change, the F-150's appearance almost takes second stage. But it is a completely different truck, with a more chiseled look that does indeed take after the Atlas concept of last year's Detroit show. Ford points to this truck's wider stance—perhaps one aspect that we find less appealing in the class, as each successive full-size truck of recent years has felt a little less maneuverable.

There’s no word yet on power, performance, fuel economy, and trailer-towing, but you can bet that Ford had all those numbers in mind all along.

Stay tuned, as we’ll have plenty more, including live photos of this groundbreaking 2015 Ford F-150, coming up live from the show floor, here and over at our Motor Authority 2014 Detroit Auto Show hub