Louisiana Drivers Are The Worst In America (Rest of The South Isn't So Hot, Either) 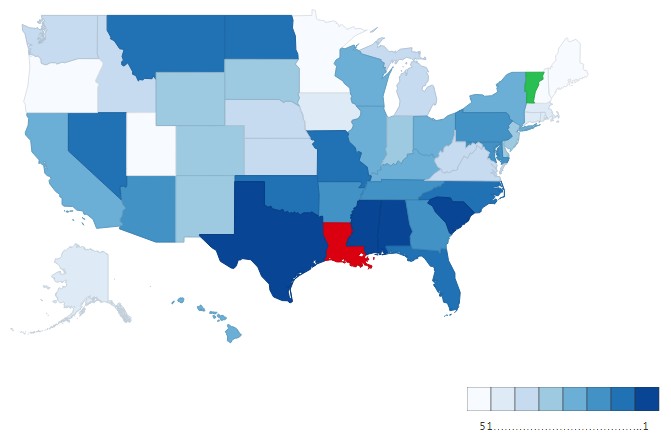 Best and worst drivers in America (study by CarInsuranceComparison.com)

When Shakespeare wrote about Italians and Spaniards, he tended to make them a little crazy. Too much sun makes the blood boil, went the thinking at the time.

Four-hundred years down the road, we know that most Renaissance medical theories were pure hogwash, but could a new study about driving in America give some support to the idea that warm weather makes Dickie-Joe and Janie-Mae a little cray-cray?

The study was conducted by CarInsuranceComparison.com and compiled five types of law-enforcement data:

The data itself came from a range of sources, including the National Highway Traffic Administration and Mothers Against Drunk Driving. CarInsuranceComparison ranked each state in each category according to how well (or poorly) it performed, then added the rankings to create a total score. For example, a state that ranked 32nd in careless driving citations and 14th in drunk driving citations would have a combined score of 46 for those two areas. (For a peek at the actual tabulations, check this Google doc.)

When all the dust settled, Louisiana had earned the dubious distinction of having the worst drivers in America. It might interest you to know that despite Louisiana's liberal alcohol policies, DUIs aren't the cause of its low rank. In fact, Louisiana "only" scored 38th (out of 51, including the District of Columbia) in rates of drunk driving arrests, but really hit bottom in failure-to-obey citations, tickets issued, and incidents of careless driving.

Whatever's wrong with Louisiana, it's catching, because the Bayou State's neighbors didn't fare too well, either. In fact, seven of the ten worst-ranked states are situated in the South. (Assuming we want to associate Texas with the South, which is a matter of some debate.) And so, without further ado, the states with the worst drivers are:

At the other end of the list -- the good end -- we find states that are generally farther to the north. The best of the bunch is Vermont, which boasts a higher-than-average number of drunk-driving incidents, but on every other metric, it's in the top ten. The states with the best drivers are:

Can we draw any broad conclusions about America based on this study? As much as we love to be equal-opportunity finger-pointers, it's hard to ignore the fact that the worst-driving states fall largely in one southern cluster, while the better-driving states lie mostly to the north.

But surely the disparity isn't related to weather -- otherwise, why would Montana and North Dakota make the top-ten worst-driver list? The overlap doesn't seem to be alcohol-related, either -- at least not among the most accident-prone segment of drivers -- nor does it seem linked to licensing laws for teens. Frankly, the problem of bad driving seems most closely aligned with poverty rates, though even that isn't a perfect match.

Then again, maybe the clusters are a coincidence, or perhaps the study is inaccurate -- something we've seen before and will likely see again. Methodology nerds could surely poke a few holes in the survey's backend, and our own experiences tell us that some states deserve slightly poorer rankings. Heck, Lindsay Lohan still roams the streets of California, and it's only ranked #19?

If you can find the flaw -- or if you think the survey is spot-on -- sound off in the comments below.