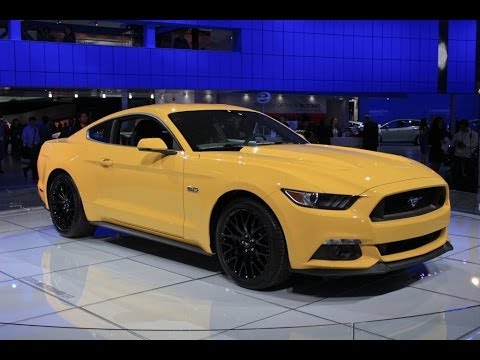 The 2015 Ford Mustang is nearly here. In fact, it's been here for a few days, depending how you look at the issue.

Official details, photographs, and information have been released now, but earlier this week, a few images of the new Mustang hit the web, feeding the enthusiast frenzy over the sixth generation of the pony car.

The first images were unleashed to the masses through an early delivery of Autoweek magazine to a Mustang enthusiast forum subscriber. Then TIME jumped on the bandwagon, releasing its own high-resolution images shot in a studio.

So now, the world knows--more or less--what the 2015 Ford Mustang will look like. But what will be going on under the hood, inside the cabin, and at the gas pump?

Under the hood, the 2015 Mustang will offer a range of three engines: the base 305-horsepower 3.7-liter V-6 we've already come to know and love from the current Mustang; a 2.3-liter turbocharged four-cylinder engine likely to be rated around 310 horsepower; and the 5.0-liter V-8 engine, good for 420 horses, as found in today's Mustang GT.

No word has yet arrived regarding a new-generation model with the mega-powerful 662-horsepower 5.8-liter supercharged engine found in the current Shelby Mustang GT500, but it's possible that powerplant could continue as well. A performance-focused GT350 model and a revival of the Mach 1 are also rumored for the new Mustang line.

As for the technology, features, creature comforts, and trim levels, as well as gas mileage and more, see our 2015 Ford Mustang preview.