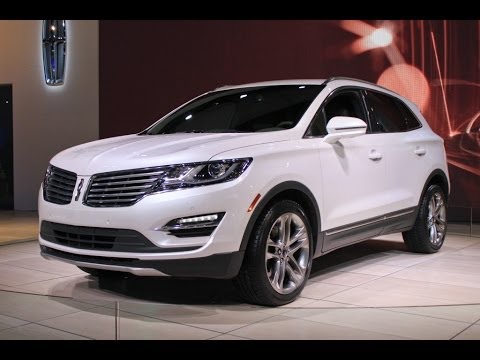 Three years ago, Lincoln promised a range of new cars and crossovers. The first of six new vehicles to come was a crossover concept introduced at the 2013 Detroit Auto Show--and now, the concept is now a production vehicle headed for showrooms in 2014 as the 2015 Lincoln MKC.

The coming MKC is a look-alike for the concept car, down to the shifter-less cockpit and the handsome wrap-around tailgate.

Based on the Ford Escape, the 2015 MKC gets some mechanical and cosmetic upgrades that set it apart, as we detail in this video preview. The exterior's a major departure from the Escape, more smoothly rendered, with wraparound taillamps and a split-wing grille. The interior? It's like the MKZ, in that pushbuttons control shifting, and open the cabin by creating more visual space to enjoy the MKC's wood and leather trim.

Under the hood, the MKC shares one powertrain with the Escape--a 240-horsepower, 2.0-liter turbocharged four-cylinder. A new 2.3-liter turbo four makes its debut in the MKC; it's also destined to power the 2015 Ford Mustang. In the MKC, it is estimated to deliver 275 horsepower and 300 pound-feet of torque. Both team with a six-speed automatic; all-wheel drive is an option.

Front-wheel drive with 18-inch wheels will be standard, with all-wheel drive and 19-inch wheels available to those who need it. Also offered on the MKC is an adaptive damping system called “Continuously Controlled Damping”, or “CCD” for short. CCD constantly monitors the road and then adjusts the suspension to suit. Drivers can also use CCD to select from “Sport”, “Comfort” and “Normal” modes.

Inside, the MKC's cabin will be snug just as in the Escape, but trimmed with more premium material. A new steering wheel will make its way from the MKC into other Lincolns. And of course, Lincoln's touchscreen-and-voice MyLincoln Touch is on the features list. Owners will also be able to control some of the MKC's features via a smartphone app.

The 2015 Lincoln MKC goes into production at the Ford [NYSE:F] plant in Louisville, Kentucky, soon, with sales set to begin in the summer of 2014. At that point, the MKC will be the second new model in Lincoln’s plans to introduce four new models by 2016.

The 2015 MKC will need all the help it can muster given the strong competition in the premium compact crossover segment, which includes the likes of the Range Rover Evoque, Mercedes-Benz GLA-Class, Buick Encore and BMW X1.

For more of our 2013 L.A. Auto Show coverage, head to our LA Auto Show page at Motor Authority.