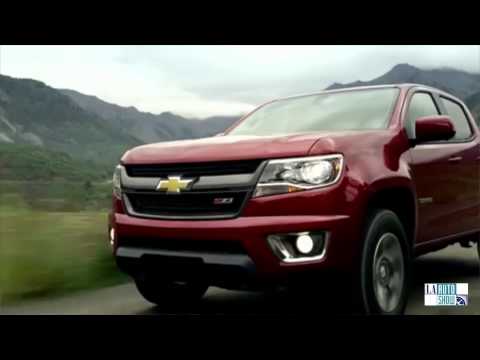 The Chevy Colorado will be GM's first mid-size pickup truck, and a companion to the bigger 2014 Chevy Silverado 1500, when it goes on sale next year.

Before then, crowds at the 2013 LA Auto Show got their first look at the Colorado, which is set to take on the likes of the Toyota Tacoma and Nissan Frontier.

GM's making big promises for its smaller truck, saying that the Colorado will top its segment in towing and payload capacity, as well as power output. To that point, the Colorado's base engine will be a 193-horsepower four-cylinder--a version of GM's corporate Ecotec four--but the uprated version will earn a 302-hp rating from 3.6 liters of V-6 displacement. Both engines will team up with a six-speed automatic, and both will have rear-wheel drive, with an option for four-wheel drive--and on some models, an automatic locking rear differential.

By late 2015, the Colorado could also be the first mid-size truck to sport a diesel engine. The 2.8-liter in-line six-cylinder diesel could be among the highest-rated trucks on the EPA's fuel-economy scale--but as of yet, no EPA numbers have been released for any model.

The Colorado will be able to tow up to 6,700 pounds, Chevy says, which would put it nearly equal to the base six-cylinder trucks from Ram and Ford.

An extended cab will be the base configuration for the '15 Colorado, with a crew-cab body available. A five-foot bed is only offered on the crew-cab model, but a six-foot bed can be had on either body style--and Chevy says it'll be able to haul eight-foot-long cargo loads with the tailgate flipped down.

Inside the Colorado, a center console provides storage for an iPad, and there's also a storage area under the rear seats.

On the connectivity front, Bluetooth will be available, as will a touchscreen interface with an eight-inch screen (on LT and Z71 Colorados) and multiple USB ports for charging and music storage. Navigation will be an option, as will GM's OnStar service beyond a free trial period.

The 2015 Chevy Colorado goes on sale in the fall of 2014. Stay tuned for more information and for a first drive next spring.