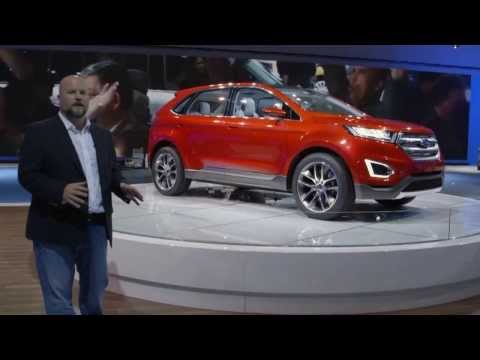 The Ford Edge Concept, the indicator for what will be the second generation of the mid-size crossover, was revealed today just hours ahead of its debut at the 2013 LA Auto Show.

The Edge concept is the brand's next take on the family utility vehicle, set to make its way to the market for the 2015 model year.

The crossover utility segment is an important one for Ford's product strategy, and the Edge Concept represents the next steps toward a single lineup of Ford cars offered across the globe. The current generation of Edge crossovers, which debuted in 2006, remain the top-selling mid-size crossover in the segment–selling three times as many units as the competitive Nissan Murano or Toyota Venza crossovers.

The Edge Concept showcases several of Ford's next-generation convenience and safety technologies, including LED headlamps, collision avoidance systems, and industry-first parking assistance tool. That park assist feature not only is capable of parallel parking the car, but it can also park itself in perpendicular spaces–even without a driver behind the wheel. That system allows the use of a remote to put the car into–and pull it out of–tight spaces, all while the passengers stand at a safe distance.

Upon first glance, the 2015 Ford Edge Concept has familiar proportions, with Aston Martin-esque styling cues found on the 2013 Ford Fusion. It's a look that translates well on the crossover–pushing the design a closer to the premium market, while maintaining the Edge's already masculine, athletic stance. It's decidedly less curvaceous than the current model, but these new chiseled lines make the Edge Concept look a little more modern, a little more current.

There was no mention of the engines being considered for the next-gen Edge, but more will be revealed in the coming months. What is known, though, is that Ford has a extensive lineup of modern drivetrains to choose from, ranging from plug-in hybrid systems to the more assertive turbocharged EcoBoost four- and six-cylinder engines.