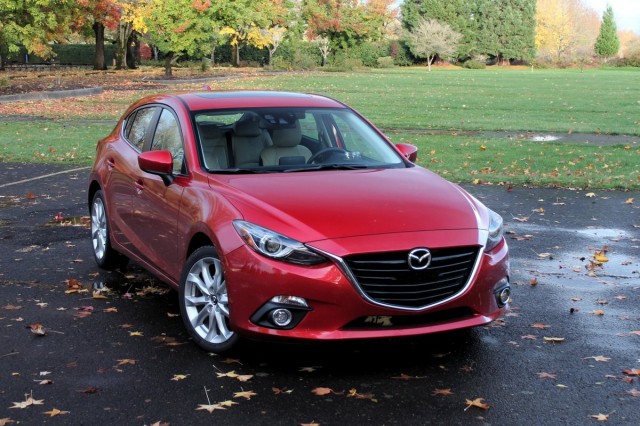 If you enjoy driving, yet need a practical, economical small car, you'd be foolish not to include the 2014 Mazda 3on your shortlist.

After spending time with several versions of the new 3, in Atlanta and Portland, we can't help but gush about its beautiful shape, its eye-catching sheetmetal, the driver-centric interior, the very impressive feature list, and how Mazda has managed to imbue its powertrains with such responsiveness, while it's simultaneously managed to far surpass the 30-mpg Combined mark for the entire lineup.

The drivers in us say, “Yes, this is how a compact car should be.”

The engine in both of the 3 s Grand Touring models we spent the most time with (a 184-hp 2.5-liter) is responsive, rev-happy, and so torquey that it never misses a beat, and the freshly engineered six-speed automatic includes steering-wheel paddle-shifters and a sport mode that altogether make it feel almost as driver-connected as if it had a manual gearbox. Almost.

Dynamically, the new 3 is also superb. It's slightly lighter than the last-generation models, and yet it drives with the somewhat more settled, composed attitude of a serious sport sedan. The bobbing and pitching motions that you'd get in the last-generation versions when the pavement undulates have now been written out of the experience, and the harder you drive and the higher the g-forces you attempt to pull in tight corners and hairpins, the better the steering feels. It's nicely weighted and even includes a little bit of road feedback.

And when you want to drive quickly, you can hit the Sport button for a more aggressive throttle setting and a delayed shifts for the automatic transmission. With it clicked, we also noticed that the stability control has a remarkably loose rein on overzealous driving styles; it’ll even permit a little bit of sliding—all in the name of fun, right?

While we haven't yet driven any of the models at the entry end of the lineup, we're anticipating that a 3 i Touring with a manual gearbox—at around $20k—might just be one of the most fun-to-drive new cars on a very tight budget.

The Mazda 3 is a phenomenal car from the driver’s seat, when the road opens up, and when you happen to have access to mountain or canyon roads up to the challenge.

But don't consider us completely seduced. As much as the 2014 Mazda Mazda3 satisfies and rewards in those respects, it's underwhelming in a few other respects. And putting the Mazda3 through the paces for this first drive, and our full review, allowed us not only to get a feel for it dynamically on some of our favorite driving roads, but to see what it's like in day-to-day commuting, and in traffic.

The rear-wheel-drive ruse has its flaws

Part of what makes you feel so 'settled in' and at home behind the driver's wheel is that the Mazda 3 takes an unusual tack for a front-wheel-drive compact car—it pretends, in many respects, that it's a rear-drive fastback. The long hood (and if you pop the hood, long exhaust manifold that takes up space) leads to a cabin that feels (and is) shorter than that of other compacts. On the up side, though, you feel like you’re sitting at the midpoint between the front and rear wheels.

The down side is that back-seat accommodations in the Mazda 3 are simply quite limited—and if you try to get in and sit back there for any time, they feel fore-and-aft virtually the same as some models that are a size smaller, like the Chevrolet Sonic or Ford Fiesta. In our Grand Touring, with the moonroof, even those approaching six feet were pushing their heads up into the headliner, which has a recess built into it. The headliner itself is an area of disheartening cheapness; it felt like flimsy cardboard covered by a felt-like material, with the entire section a bit loose over the moonroof mechanism in both test cars we spent time with.

A Kia Soul we had around at the same time had a far more spacious back seat (and we're not talking just headroom); and a Nissan Sentra that we had at the time, while it doesn't compare in other ways, felt a full class ahead in back-seat space.

The Mazda 3 feels premium from the front seats forward, with materials that are major step forward for Mazda—even in some cases better than what’s offered in the new Mazda 6. But there are some disappointments as well; for instance, the interior surface alongside the front doors is soft touch, but alongside the rear doors it's a hard surface that mostly mimics the look but has a slightly different sheen and is just hard plastic (Mazda isn’t the only offender; it’s also done by Honda in the Civic, for instance).

Rolling on 18s, not particularly quiet or smooth

A few other gripes emerged when we got over the adrenaline surge of some rewarding driving roads and plodded along in traffic. The 2014 Mazda 3 makes slight advances in damping road noise, but there's still a lot of it compared to most other models in this class. As soon as the surface turns rough, you hear it on our test car with its 18-inch alloys; and ride comfort in general is a little on the busy side of what we'd consider the class norm.

One thing we really like in the Mazda 3 is how the brand hasn't skimped on sound systems and connectivity this time. The so-called Mazda Connect that was included in our Grand Touring has a colorful, high-contrast seven-inch screen, a reasonably intuitive menu system, and none of the lagginess that we've noted in the simpler (and older?) system from the Mazda 6 and CX-5. HD Radio, satellite radio, and multiple media sources are all well-integrated, as are several audio-streaming apps, and navigation with a simple point-of-interest search. Yes, the Command Controller is essentially an iDrive clone, with the center-console volume knob of Audi's MMI; but it works well, and you can tab left and right between menu screens, and twist and click to make selections; and we love redundancy built into the system. You can stop and just use the touch screen—or voice controls, for some things.

The Grand Touring includes what Mazda terms the Active Driving Display—essentially a heads-up display that uses a little flip-up display screen atop the dash. It's weird and feels like an aftermarket solution, but it's effective in keeping your eyes on the road. In both of the cars we drove, the system had trouble remembering where we set the viewing height (through a screen menu), requiring a tiny nudge after each startup to get the viewing angle back.

Lots of tech to cement the premium-car ambiance

Our test car, at around $30k, also had the Technology Package, which in addition to a set of active-safety features includes two fuel-saving measures: active grille shutters, and the i-ELOOP system, which maximizes alternator load and charges up a capacitor system when you're decelerating, then releases that energy for accessories (and a lighter alternator load) when you're accelerating and cruising. About the only thing we noticed from this system, in following its energy-flow screen, was that there was more apparent engine braking when the system was loading up the capacitors.

In all, it's hard to estimate the contribution of that system, but we did well with the Grand Touring we had for a week, averaging more than 27 mpg over 160 miles of driving, which included about 30 miles of foot-to-floorboards, enthusiastic driving on some of our favorite backroads, as well as nearly ten miles in near-gridlock traffic.

Frankly, we expected Mazda to follow the outgoing 3 up with one that was a little more practical. Instead, what they’ve created is something that we think adds up to the same level of niche appeal as before. After driving experiences with several different Mazda 3 models, representing nearly three hundred miles of driving, altogether, we can say that the all-new 2014 Mazda 3 might be more athletic, more fun to drive, more efficient, and more charming in many respects; but it’s not necessarily the best pick for all mainstream compact-car buyers.

A calculated risk: Enough drivers out there?

The Mazda 3 adds up to a calculated risk: Will producing a shape that’s undeniably sportier--the shape of a rear-wheel-drive car, really--add up more interest from the market, and more differentiation in what’s now a crowded class of very good entries? And will those benefits outweigh the loss in practicality?

To those of us who love to drive, that's a no-brainer.