Connect with our dealer and finance partners through our site and ask for details regarding their at-home car buying services.
OK
HomeNews30 Days of the 2014 Mercedes-Benz CLA 250

30 Days of the Mercedes CLA: Turbo Fours And Dual Clutches 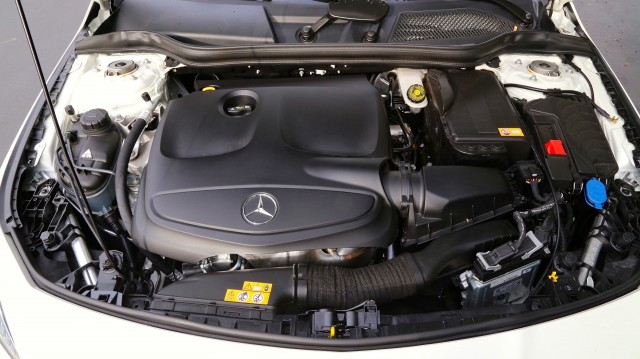 We're winding up our 30 days of seat time with the 2014 Mercedes-Benz CLA 250 this week, and as we put another few hundred miles on our $36,320 Cirrus White CLA 250, we're narrowing down the best and worst of its drivetrain.

Before we ever drove the CLA 250, its performance numbers set up a loaded comparison with one of the best compact Mercedes-Benzes ever, the 190E 2.3-16. In its early-'80s heyday, that car earned a reputation as a mini-Hammer, a brilliant forerunner to the AMG-built E-Class that ran under that nickname de plume. It had 0-60 mph times of less than 7.5 seconds and a top speed of 143 mph.

The CLA 250's a perfect example of how the expectations for car performance have changed so quickly. Thirty years down the road from the 2.3-16, the base CLA beats its numbers handily, with a 0-60 mph time pegged at 6.9 seconds, and a top speed set at 149 mph by tire ratings.

How it gets there isn't completely off-track from the 190E example. The CLA sports a multi-valve four-cylinder, one displacing 1991 cubic centimeters, and sporting the kinds of technological leaps that crank out its 208 horsepower and 258 pound-feet of torque in better, more reliable ways: engine management systems that keep its turbocharger from prematurely fragging itself, direct injection for better fuel burn with fewer moving parts. It's a relative of the four-cylinder that can be had in the C-Class now, only laid out transversely, to give the CLA a fighting chance at keeping weight down.

The four-cylinder's massaged to drop a lot of torque at the driver's feet barely off idle--peak power lands around 1,250 rpm and stays in the game through 4,000 rpm. And it's sealed off from the cockpit by a firewall that has some hard-working sound deadening: over the past few weeks we've heard lots of feedback from the engine at drive-thrus, and from outsiders who hear its direct-injection click and think it's a diesel. The impression from the driver's seat is of strong acceleration, with a grotty soundtrack that sounds more AMG than Mercedes.

We've also eavesdropped on complaints that the CLA 250 has bags of turbo lag, and we're going to have to disagree. When it's left in default driving mode the CLA can seem slow to shift, but it's all on purpose, and you can thank CAFE for it. With its down-low torque output, the CLA doesn't lag except when it wants to, when its dual-clutch transmission is left in default Eco mode, when it rushes through its three quick launch gears to get to the four overdrive gears that help it generate 30-mpg combined EPA ratings.

The dual-clutch transmission is the drivetrain piece that gives pause, literally. CLA drivers expecting Lexus-invisible shifts won't get that satisfaction here. The seven-speed DCT lingers in those upper gears, and takes a few dozen milliseconds to slide its dueling transmissions in and out of place when it's in Eco mode. The intermediate step: the transmission's Sport mode, accessible from a switch on the center stack, which speeds up the gearchanges alone. It wasn't a part of the pre-production plan when we first drove the CLA in February overseas, but it's there now, and worth a look if you have complaints about the timing of shifts.

Of course, we prefer to do it all ourselves. That's what the switch's Manual mode is for--something more easily accessible by clicking on the CLA 250's shift paddles, once or many times as needed. Hitting a paddle activates manual mode for 30 seconds, and automatically reverts to Eco mode when that time's elapsed--another trick to keep the CLA reaching for its EPA-maximum 38 mpg highway.

Stop/start, by the way, is integrated into the CLA drivetrain, and it sends a shiver through the drivetrain when it shuts off the car and restarts at pauses longer than a couple of seconds. As a culture, we're all getting used to the sound of cars not running at stoplights, right?

So far, we haven't experienced a withering effect on fuel economy from our CLA 250's manual-shift mode--but then again, probably two-thirds of our nearly 3,000 miles have been in favorable conditions. We're well over its official combined ratings at this point--and well aware of how to get around its standard drivetrain settings.

But we'll save our gas-mileage stats for another day. Tomorrow, we'll tell you about the CLA's COMAND infotainment system, and how we've grown more familiar with its complexities. Then we're taking the CLA 250 and its AMG counterpart, the CLA45 AMG, off on a secret mission. Stay with us for the rest of this month, as we bring you more from our 30 Days drive.