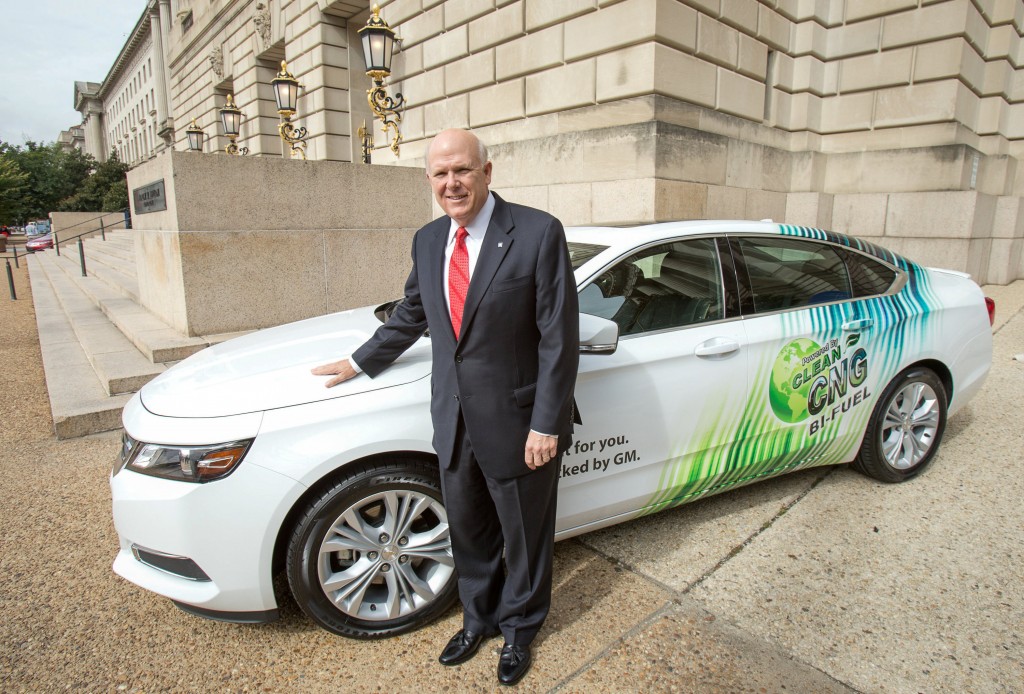 Forty years ago today, the Organization of Arab Petroleum Exporting Countries launched an oil embargo against the U.S. in retaliation for America's support of Israel during the Yom Kippur war. The effects of that embargo can still be seen today in the form of increasingly eco-friendly vehicles, some of which run on alternative fuels.

In fact, you could argue that the 1973 Oil Crisis is directly responsible for General Motors' newest vehicle: the 2015 Chevrolet Impala, one version of which will be capable of running on both gasoline and compressed natural gas.

Appropriately, the car was unveiled by GM's Chairman and CEO, Dan Akerson, at a summit called "OPEC Oil Embargo + 40: A National Summit on Energy Security". He said that the bi-fuel Impala will be sold to both retail and fleet buyers, though it's not clear how many units of the special model GM plans to produce.

Like electric cars, CNG vehicles suffer from image problems -- namely, range anxiety. However, Akerson said that the powertrain on the bi-fuel Impala switches seamlessly to gasoline when the CNG runs out. (In that way, it's much like the Chevrolet Volt, which quietly flips from all-electric to gas mode when battery power is depleted.) The Impala's range is expected to be around 500 miles.

CNG vehicles haven't really caught on in the U.S., but in theory, there's no reason that they shouldn't. America has abundant natural gas reserves, and emissions from CNG vehicles are usually 20 percent lower than their gas-powered cousins.

Complete details about the 2015 bi-fuel Chevrolet Impala will be released closer to next summer's official launch. In the meantime, you can find additional info and perspectives at Green Car Reports.