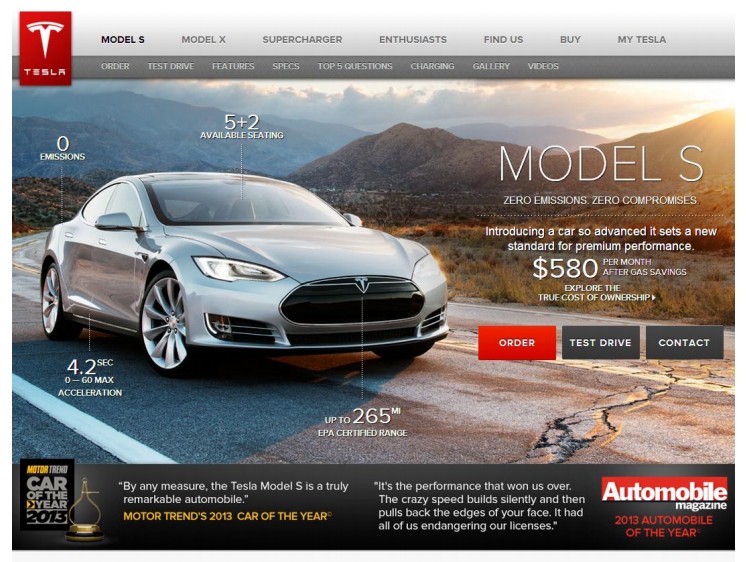 Screencap from Tesla website, included in complaint to California DMV from dealers

First, it had to make a fully electric car that didn't look like a doorstop or a computer mouse from 1997. No small task, that.

Then, it had to find a few backers, which caused consternation in some corners.

And then it had to jump perhaps the biggest hurdle of all: selling cars to the public without creating a network of dealers. (For that, the company brought in no less than the man who created Apple's outrageously successful chain of retail stores.)

Dealers' associations across the country have been suspicious of Tesla from the start. Early on, many dismissed Elon Musk's vision as a pipe dream, but when it became clear that he wouldn't give up, they aimed for his Achilles Heel: Tesla's unusual, showroom-based sales model.

What those associations didn't expect was that the courts would often rule in Tesla's favor. Nor did they expect that the public would often side with Tesla, too, as disgruntled car customers, tech fans, and innovators said, "Let the little guy give it a go!"

And so, according to AutoNews, the California New Car Dealers Association has changed its tactic. It now says, "Oh, you must've misunderstood. We're totally cool with Tesla's 'showrooms'. What we have a problem with is Tesla's marketing. Elon Musk is trying to pull a fast one on poor consumers!"

In a letter to California's Department of Motor Vehicles (PDF), the Dealer's Association claims that "Tesla’s Internet marketing violates multiple sections of Federal Regulation Z, the California Vehicle Code, the California Business and Professions Code, and the California Civil Code." For example:

"Tesla fails to provide required information and shatters the notion of comparison finance shopping by including the potential availability of incentives, gas savings, and tax savings into final payment quotes for prospective customers. This scheme is most blatantly demonstrated by the general ―$580 per month after gas savings advertisement found on several of its internal web pages."

The Association goes on to attack other Tesla claims, which reduce monthly payments and the costs of ownership. For example, the Association says that purchase prices on Tesla's website routinely include a $7,500 federal tax credit, despite the fact that the Congressional Budget Office states that only 20 percent of shoppers qualify for the alternative vehicle credit.

The Association also criticizes Tesla's math on resale value, commute times (thanks to HOV-lane travel), and cost-savings associated with using electricity instead of gas.

Factually speaking, the Dealer's Association is correct in its description of Tesla's website. But the site could only be construed as "misleading" if your name is Pollyanna and you zip through it without doing much reading. A quick skim of the "True Cost of Ownership" section makes it clear that Tesla's boasts are just that: boasts.

For example, in the "Down Payment & EV Incentives" area, Tesla states:

"In many cases, you’ll recoup the cost of your down payment with electric vehicle incentives. You may even be eligible for more total incentives than you paid in your down payment. This will reduce your effective monthly cost. Incentives depend on the total price of your car and the state that you live in." [emphasis totally ours]

Words and phrases like "In many cases" and "depend on...the state that you live in" tell most people with adult reading skills that there's some uncertainty in Tesla's calculations. You "may" be eligible for these savings, but then again, you "may" not.

That's not to say that Tesla shouldn't play by the rules. It should, just as Ford dealers should, and Buick dealers, and Toyota dealers, and so on.

However, in this case, it seems as if the Dealer's Association may be grasping at straws. That that could be because its members realize that Tesla's new business model might be a bigger threat than they'd ever imagined.