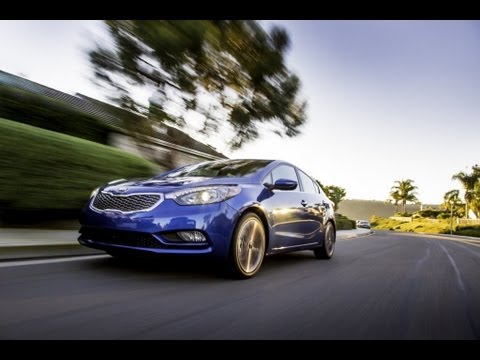 The Kia Forte doesn't have the perennial best-seller badge of the Honda Civic or Ford Focus, but there's a new model this year with a new mission--to chase after those class leaders. Does the Forte have what it takes to beat the competition?

Good looks now run in the Kia family, and the Forte actually wears its new lines better than some of  its larger siblings. It may be based on the Hyundai Elantra, but you wouldn't know it. The lower, wider, longer stance lends itself well to the details such as the wraparound taillights and swept back headlights.

Moving inside the Forte caps years of advances at Kia. The dashboard is simple but sculptural. We like that there isn't a bulky center stack here, and these plastics are finished nicely. These climate controls couldn't be easier to understand, and some Fortes have a large LCD screen in the dashboard.

The front seats have a good range of adjustment, and even tall drivers will have plenty of headroom, though they could use a bit more support. In the back it's the typical compact car story. There isn't quite enough head room for six-foot passengers, but there's plenty of foot room, and the door openings are large making entry and exit quite easy.

If you head to your Kia showroom, you'll find that the Forte starts from just under $16,000. For that price you'll get standard power locks, windows, and mirrors, Bluetooth, steering-wheel mounted audio and phone controls, and air conditioning. A popular package option adds 16-inch wheels, keyless entry and cruise control. An Eco package adds a stop/start function. A loaded up EX like our tester will run you a bit over $25,000, but there's a lot of stuff here for that price. Navigation, a cooled glovebox, automatic climate control, heated seats both front and in the back, ventilated driver seat, and LED taillights.

While the competition hits the 40-mpg mark, the Forte isn't there yet. Depending on the engine and transmission you choose, numbers range from 24 mpg in the city to 37 mpg on the highway. Not awful, but also not class-leading.

Safety-wise, NHTSA gave the Forte four stars overall. The IIHS gave the 2014 Forte a good rating for all the tests except for one. It did poorly in the front small-overlap test. That gives the Forte one of the lower safety scores from our editors for the 2014 model year. All Fortes come with six airbags, stability control, and Bluetooth. You can option for a rearview camera but only on the upper EX trim.

So what's the bottom line with the 2014 Kia Forte? It's found a better focus with well-rounded performance and grabby good looks, but safety's not up to par.