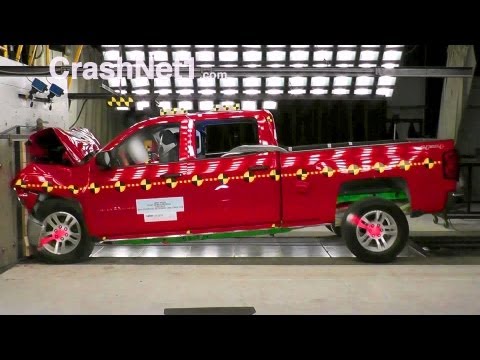 Yesterday, we told you about the Tesla Model S -- a car so safe, it broke the equipment that the National Highway Traffic Safety Administration uses to gauge safety.

General Motors' pickups haven't quite matched that impressive feat, but the 2014 Chevrolet Silverado 1500 and High Country and the 2014 GMC Sierra and Sierra Denali 1500 have accomplished something that no other trucks have done. According to GM, they're "the first pickup trucks to receive the highest possible five-star Overall Vehicle Score for safety since the National Highway Traffic Safety Administration changed its New Car Assessment Program for the 2011 model year".

In other words, GM's trucks aced a battery of frontal, rear, and side impact tests, as well as NHTSA's side pole impact test and its rollover test. That last bit of news is particularly impressive, since the height of these vehicles gives them an added likelihood of flipping over during a collision.

GM credits its high scores, in part, to the safety features that come standard on Chevrolet and GMC trucks, including lap-belt pre-tensioners and six airbags covering nearly all parts of the cabin. The Silverado and Sierra also have a range of optional features like forward collision alert, lane departure warning, trailer-sway control, and a safety alert seat, which vibrates to alert drivers of oncoming dangers.

There is one caveat, though: NHTSA's tests were conducted on crew cab models of the Silverado and Sierra. And even though GM expects those to make up 60 percent of sales volume, the other 40 percent will probably be sold with standard cabs. We'll keep you posted on how those tests come out.

In the meantime, there's plenty of footage of these trucks getting beaten up by NHTSA's testing team. Check out the clip above and the one below if you're looking for Wednesday time-wasters.