Ford F-150 To Be Offered Ready For Natural-Gas Conversion 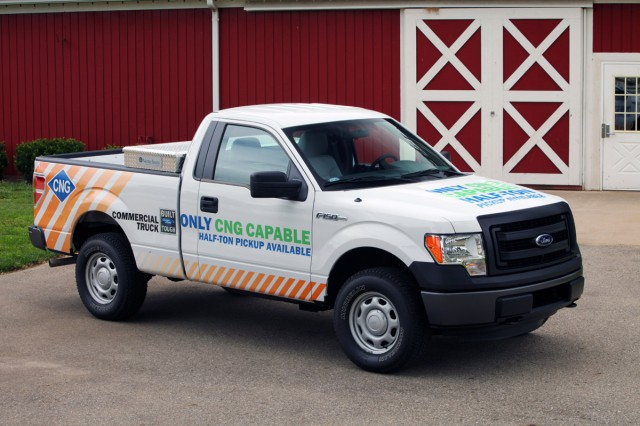 Ford announced today that it would offer an optional natural-gas readiness package the 2014 model of on its popular F-150 pickup truck, equipping the truck to be converted to natural-gas or bi-fuel operation by qualified third-party installers.

It's the first half-ton pickup truck to be offered with such an option, although heavy-duty versions of Chevrolet, GMC, and Ram pickups offer natural-gas options of various types.

The package, which can be ordered on the base 3.7-liter V-6 engine, readies the vehicle to run either on compressed natural gas (CNG) or liquified petroleum gas (LPG).

It consists of several components modified for the different characteristics of natural gas combustion, including valves, valve seats, pistons, and rings that have been hardened to accept either natural gas or gasoline supplied through separate fuel systems.

Ford said fleet and business buyers of the F-150 have been asking for natural-gas capability, due to the fuel's low price per gallon-equivalent (currently $2.11 on average) and its cleaner emissions. The EPA says natural gas emissions are about 30 percent lower than gasoline engines in the same vehicle.

Depending on local CNG prices, annual miles covered, and other factors, Ford suggests that some buyers could see a payback on the additional cost of the second fueling system in three years or less.

The cost of the optional natural gas-readiness package is $315. Qualified vehicle modifiers that have been certified by Ford to add the second fuel system will charge $7,500 to $9,500, the company said.

Ford warrants the engine for five years/60,000 miles, while the modifier is responsible for the warranty on the additional fuel system and its various components, including the reinforced natural gas tank, which stores the compressed gas at 3,600 pounds per square inch.