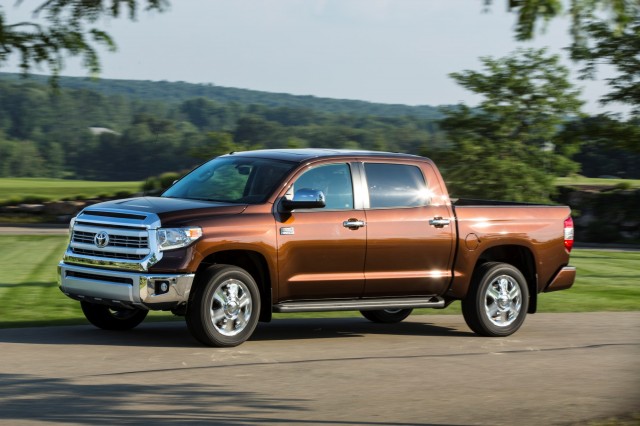 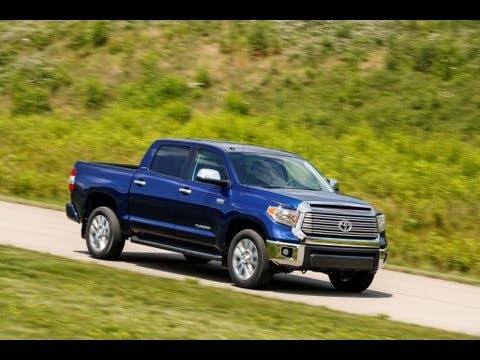 With a new 2014 Chevrolet Silverado, the EcoBoosted 2014 Ford F-150, and the soon-to-offer-diesel 2014 Ram 1500 on the field, the 2014 Toyota Tundra faces a very tough challenge: convincing truck buyers to pick it over any of the very capable alternatives.

Fortunately, the Tundra has quite a lot going for it. A choice of V-6 or one of two V-8 engines remains the same as last year, but updated exterior and interior styling, plus new equipment and trim levels keep the Tundra looking and feeling fresh.

Those engines were lackluster the last time around, however, and remain so. The sharper, crisper design and better cabin materials on the 2014 model makes the engines even more underwhelming. That's not to say the top-line 5.7-liter V-8 isn't up to many tasks; the maximum tow rating of the Tundra is 10,400 pounds, and most configurations with the biggest engine can tow 9,800 pounds or more, even with a crew cab and four-wheel drive--and the Tundra is the only truck on the market to meet the SAE's J2807 towing specification, a validation procedure developed by the industry, including Toyota's competitors.

While towing on a closed course with a roughly 8,000-pound recreational trailer on a weight-distributing hitch, in a Pro4X off-road package truck, the 5.7-liter V-8 had no real trouble moving the trailer from a stop, but from 30-60 mph, acceleration was less than ideal for clean freeway merges. Braking was never a problem, nor was turning, though at speeds above about 50 mph, the front end of the truck felt a bit light over bumps--it was never enough to divert the Tundra from the intended path, but that's easily avoided on a straight and fairly level airstrip. While the Tundra may be more than capable of towing such a load in the real world, our experience did not inspire confidence in the ease with which the driver might do so.

Around town and unloaded, the Tundra's taut, firm ride contrasts with rather soft seats for an unusual, but not entirely unpleasant ride quality. Some sharp pavement seams and potholes can produce more of a jounce for occupants than you'd normally find in a half-ton truck, however. The ride quality is the result of retuned dampers and spring rates for the 2014 model year, and while the feel may be a touch on the firm side, it's a vast improvement over the often mushy feel of the previous versions of the Tundra.

Four core trim lines are available in the 2014 Tundra: SR, SR5, Limited, and Platinum. The 1794 Edition shares the Platinum's equipment specification, but adds its own unique ranch-themed interior color combination and 1794 Edition badges.

The cabin's materials and style are updated from last year's Tundra, and it's a welcome and much-needed upgrade. The SR5-spec Tundra is near the lower end of the range, but still feels sturdy and looks like a truck should--honest and simple, without being plain. For more frills, there's the Limited, Platinum, and a new 1794 Edition. Each gets leather seating and upgraded trim materials, as well as more connectivity, information, and entertainment technology.

Among the new technology features for the 2014 Tundra is Entune with available App Suite functions, enabling access to Bing web searches, iHeartRadio, Pandora, Facebook Places, OpenTable, Yelp, and more. The Entune name is now used for the whole center-stack interface, which can take the form of the base Entune Audio system, the upgraded Entune Audio Plus (standard on SR5), the Entune Premium Audio with Navigation and App Suite (standard with Limited models), and the Entune Premium JBL Audio with Navigation and App Suite (standard on Platinum and 1794 Edition models). The top-end JBL audio system packs 440 watts of power across 12 speakers and eight channels.

One aspect of the 2014 Tundra we fortunately didn't have an opportunity to test is its safety. With a proven track record of topping the pickup lists in crash-testing (the 2013 Tundra was an IIHS Top Safety Pick), as well as a full assortment of active and passive safety aids, the Tundra is just about the safest truck on the market. A backup camera further enhances safety, while also making trailer hookup a cinch, even if you're all by yourself.

All in all, the revised and freshened 2014 Toyota Tundra looks and feels like a brand-new truck--but it drives a lot like it always has, sporting the same engines and transmissions that have served it since its entry into the true full-size pickup market in 2006.

Are the updates for the 2014 Tundra enough to make it a standout? No. But it is a very solid, capable truck, with plenty to recommend it--just don't expect to convert your Blue Oval and Bowtie friends.

Toyota provided airfare, food, and lodging to enable us to bring you this first drive report.