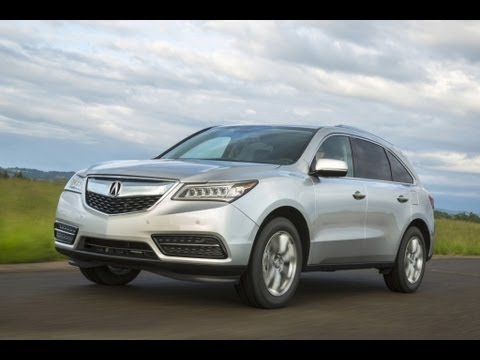 The MDX crossover SUV is Acura's best seller, and it's been a great family wagon choice for more than a decade. It's new this year--and it's only gotten better.

This may be a new MDX, but the styling is so evolutionary, you might not spot the differences. The LED headlights and taillights are the most obvious changes, but it looks a bit slimmer, too, and the awkward grille's been tamed down.

But who looks at a crossover from the outside? When it comes to family cars, it's all about the interior. The MDX's cabin gets kudos here. The tiered dash and V-shaped center stack fit the Acura brand, but the controls themselves are kind of a mess. Two screens and a large control knob and lots of buttons--you'll need some time to get used to it all.

Under the hood of the MDX you'll find a 3.5-liter V-6 engine rated at 290 horsepower and 267 pound-feet of torque. Power is sent to the wheels through a six-speed automatic transmission. Front-wheel drive is standard, but Acura's Super-Handling All-Wheel Drive is an option--it's smart enough to send power to boost traction and improve cornering.

You're about to haul your kids to soccer practice in this thing, right? So safety's a big deal, but don't worry, the MDX has you covered. Acura expects it to earn top scores in crash tests, and even a Top Safety Pick+ award from the IIHS. The full roster of airbags includes a driver knee airbag. The safety tech is here as well, from available lane departure warning, forward collision warning, wide view camera system, and blind spot monitoring, there's enough tech here to make your head spin. There's even a lane assist system that can gently nudge you back into your lane if your attention is drifting.

Both the front-drive and all-wheel-drive versions of the MDX come in four trim levels: Base, Tech, Tech Entertainment, and Advance Entertainment. Starting from just over $43,000 and pushing toward $57,000, the MDX is pricey, but not out of line with other luxury utes, even with options like navigation. For the kids, there's an available 16.2-inch ultra-wide screen rear-seat entertainment system available with an HDMI input--or, charging points for iPads, take your pick.

So what's the bottom line with the 2014 Acura MDX? It's more focused than ever on its mission of keeping the entire family comfortable, content, and entertained--and yes, that still includes the driver.

For more information be sure to read our full review of the 2014 Acura MDX.