2014 Chevrolet Spark EV: We Drive The World's Most Efficient Car 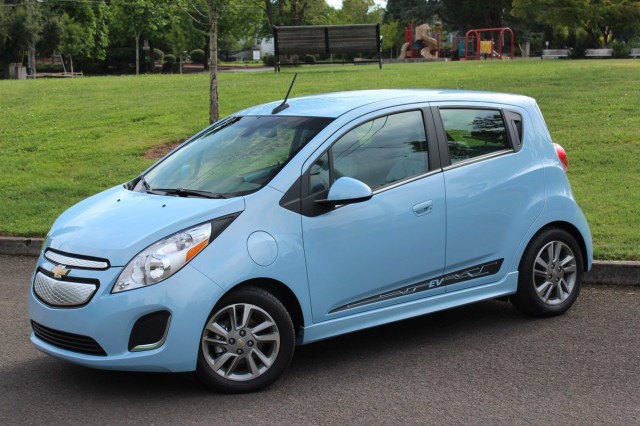 At last, for the first time since the now-legendary EV1, General Motors has another all-electric car: the 2014 Chevrolet Spark EV.

This past week we spent much of a day using it to get around urban environs in Portland, Oregon, and found it to be one of the best-driving battery electric cars yet. As GM likes to tout, the Spark EV is the quickest of the new crop of 'affordable' electric models, with a 0-60 mph time of just 7.6 seconds, and up to 400 pound-feet of torque on tap from its 105-kW electric motor system.

Meanwhile its 21-kWh battery pack helps provide an EPA-rated 82 miles of driving range—and based on what we saw on this first drive, that will be quite easy to achieve. GM has also claimed that it's the world's most efficient production passenger car—at least, on an mile-per-gallon-equivalent basis. With the experience gleaned from the EV1 and more importantly the Chevrolet Volt, GM has a much better lock on drivability and regenerative braking smoothness than some other automakers.

It might also, better than most other EV makers, have a grip on one other important concept: range anxiety. With the so-called 'confidence gauge' in the Spark EV, you at an instant have worst-case-scenario and best-case-scenario numbers on how far you could get with remaining charge.

While the Spark EV looks almost exactly like its gasoline namesake, GM officials insist that it's no quick conversion, and it's no 'compliance car.' The project started in 2010—after the Obama administration set forth new standards for the federal Corporate Average Fuel Economy (CAFE) system but before the new framework was agreed upon (in 2011).

The Spark EV is currently only available in California and Oregon, and although the company won't say when it will make the electric car available in other states—and furthermore those outside of the California-emissions states where it's required to meet those 'compliance car' numbers—we were assured that production won't be choked off when the number is met.

See our full First Drive Report of the 2014 Chevrolet Spark EV over at Green Car Reports.