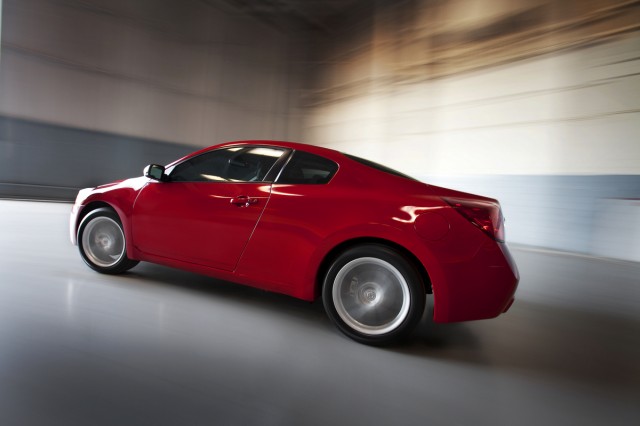 The 2013 Nissan Altima Coupe missed the update train when the Altima sedan pulled out of the station for the 2013 model year, and now it has been left behind entirely. Nissan announced its 2014 lineup today, and the Altima Coupe isn't included.

While the death of the Altima Coupe might come as a shock to fans of its sleek shape, but it wasn't a surprise. When the Coupe missed the redesign the Altima sedan received for 2013 and carried forward with just a single trim line, we asked how long the two-door version might stick around--and didn't expect it to be long.

The move highlights the uncertainty of the major carmakers around the mid-size coupe class; Nissan joins Toyota in abandoning the segment, while Honda continues to build the Accord Coupe, the only other major two-door mid-size offering outside the muscle car and sports car categories.

On the other hand, more affordable (and smaller) coupes are proliferating: the Hyundai Elantra, Kia Forte Koup are examples of recent additions to the compact coupe niche.

Updates to other models include enhancements to technology and infotainment features on the 2014 Nissan Altima sedan, Leaf and Maxima; the addition of the all-new Versa Note hatchback; and a variety of trim package and exterior color options changes for most of the lineup. The 2014 Versa gets an improved suspension and steering tune, too, while Sentra and Altima models are among those included in the new NissanConnect Apps smartphone integration system rollout.

On the sporting side of Nissan's 2014 product range, the Nissan GT-R gets a special 150-car limited-edition Track Package; a limited-edition Special Edition package from late 2013; tweaks to the suspension and chassis for better handling; and a new Premium Interior Package with hand-stitched semi-aniline leather. The 2014 370Z coupe and roadster carry forward untouched, and the 370Z NISMO slims down to a single model configuration while offering new interior and exterior color choices.

Visit our full review for more on the Nissan Altima, or research any new Nissan here.