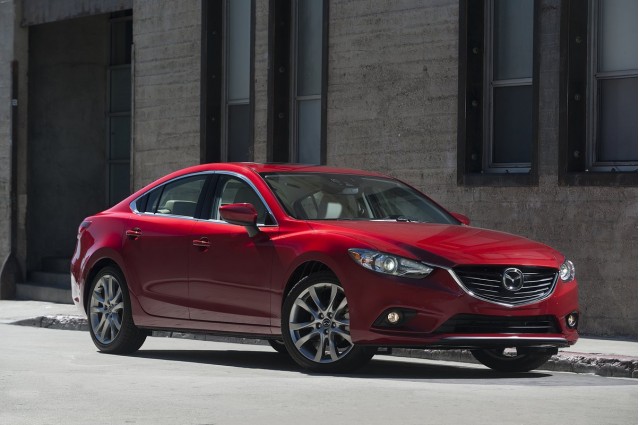 Mazda pitches its 6 sedan as the fun-to-drive alternative to more boring family sedans. But is that really the case? Does it have the basics down pat, compared to a Ford Fusion, a Honda Accord, or a Nissan Altima?

Mazda has one thing in its win column--looks. We'd put the Mazda 6 right next to the new 2013 Ford Fusion for the best styling in the class. The shape's lean and glassy, but with enough muscle to give it a distinctive look. It's tough to find an awkward angle.

The cockpit won't seduce you as quickly, but it's neatly laid out. There's enough bright trim to call out the details, and it's all organized logically. The problem is Mazda's limited infotainment systems. The base stereo looks dated, and barely fills out the space on the dash. The optional system with navigation looks like an aftermarket system, with a small display and small touchscreen buttons.

Interior space is important in a family sedan, and the Mazda 6 has enough to compare with the Fusion, if not the Accord or Altima. The front seats are very good, with more side support than usual.  In back the bench seat is tall, and that can make entry and exit awkward, especially with that raked roofline. The middle seat is a hump--it's not really for any grown-up passenger. And let's not forget -- the Mazda 6 is a Top Safety Pick.

The Mazda 6 handles better than it runs and guns. There's no more V-6, and for now, there's just one engine, a 184-horsepower four-cylinder with a choice of either a six-speed manual or a six-speed automatic.

Great gas mileage is one thing, but the Mazda 6 can feel slow, compared to turbocharged Fusions and V-6 Accords and Altimas. To get into the power,  you really have to keep the revs high--and in the automatic that means using the manual mode or paddles a lot. At that point, why not get the manual? Once you build the power, though, the 6 handles with precision. The steering weights up nicely, with that typical electric-steering numbness, and the ride strikes a good sporty balance for a family sedan.

Mazda went this way in the name of gas mileage, and the 6 gets EPA ratings of 26 mpg in the city and 38 mpg on the highway. We've seen about 31 mpg combined. A four-cylinder diesel engine is coming soon, and it could easily top 40 mpg highway.

Like most mid-size family sedans, the Mazda 6 starts from about $20,000 and includes power locks, windows, and mirrors; air conditioning; push-button start; and a USB port. Add the automatic and you also get Bluetooth, HD radio, and a rearview camera with a 5.8-inch color screen. The $23,000 Touring edition gets dual-zone climate control and blind-spot monitors, while the $31,000 Grand Touring gets paddle shifters, navigation, leather, and Bose audio.

So what's the bottom line with the 2014 Mazda 6? It's shy on horsepower and state-of-the-art infotainment, but it's overstocked on beautiful styling and refined handling.