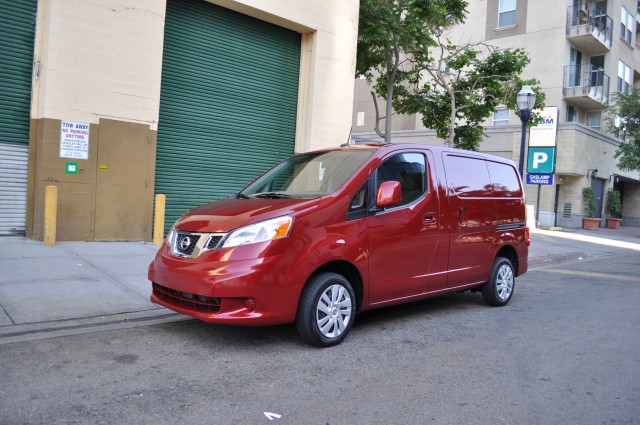 Small cargo vans might not be the first vehicle you consider when shopping new, but chances are you've gone for a ride in one already--or will soon.

The NV200 is new to the U.S. market, but it's been on sale in 40 other countries for some time. If you're a world traveler, you've seen it before. The compact van also was chosen as the upcoming New York City "Taxi of Tomorrow," and will hit the streets of the Big Apple later this year, just in time to ferry you from LaGuardia to Times Square.

Cargo vans aren't designed to look pretty, they are designed to be functional, and the NV200 doesn't stray from that model. The front end is blunt and sharply angled; the steep rake generates a little aerodynamic help.

Not to spoil the mystery ending, but the rest is...a van. A usefully sized box, the NV200 has 40/60 split-opening rear doors with both 90- and 180-degree opening positions. This makes curbside unloading both easier, and safer. The cargo doors are solid metal, though glass windows are an option.

It's a basic look, with black plastic bumpers even, but upper trim models feature body-colored front and rear bumpers, door handles, outside mirrors, and a chrome grille.

Nissan built in low-effort dual sliding side doors, and a low load floor. The lift-over height both at the sides and at the rear doors is low at 21.1 inches, making loading and unloading heavy items a little easier.

It's all about the workspace

Nissan believes vans like these are stealth offices, so the NV200's interior has been styled to accommodate.

The dashboard is a boring but functional stretch of hard plastic, with simple-to-use knobs that can be easily controlled while wearing gloves. The front passenger seat can fold down to create a worktop space, or to increase cargo capacity.

The recessed storage area on the upper instrument panel can hold folders and documents, a thoughtful touch. A cubby between seats holds more small items, and if you need to hide a laptop, there's a tray under the passenger seat.

Cargo van drivers rely on technology. The NV200 has an available 5.8-inch color touchscreen display with NissanConnect, which includes navigation, Bluetooth, satellite radio with real-time traffic, and a USB port. This system also enables hands-free text messaging, streaming audio, Pandora radio capability, points-of-interest by Google, and Google's send-to-car, which gives you the ability to send your destinations to the car from a computer. A backup camera is also available, and highly recommended for those times when the rear is loaded with cargo.

How much can you haul?

The NV200 doesn't seem like a large vehicle from the outside, but the interior is spacious thanks to an efficient design. It can carry 122.7 cubic feet of cargo, and has an estimated payload capacity of 1,500 pounds.

Unfortunately, both of these numbers trail the current Ford Transit Connect at 129.6 cubic feet of cargo room, and 1,600 pounds of payload. And the next-generation Transit Connect coming next year retains the 1,600-pound payload rating while increasing cargo capacity to at least 130 cubic feet.

Under the hood of the NV200 you'll find a 2.0-liter four-cylinder engine rated at 131 horsepower and 139 pound-feet of torque. The only transmission option is Nissan's Xtronic CVT, and this helps the powertrain get 24 mpg in the city, 25 mpg on the highway, and 24 mpg combined. After zeroing out the NV200's built-in trip computer, we averaged 22 mpg in mixed driving with a heavy foot and the air conditioning blasting.

Nissan's planning to test a zero-emission electric NV200 dubbed the e-NV200. It will be testing the plug-in electric van with small businesses around the U.S. later this year. If successful, it could end up working its way into mass production, and even the New York City taxi fleet.

As far as cargo vans go, the NV200 drives like you'd expect. It's not fast, there's no feedback as to what the wheels are doing, and with only 131 horsepower you really need to be above 3,000 rpm to make anything happen quickly, and we use the term quickly loosely in this instance. The suspension is soft, allowing the NV200 to absorb bumps and broken pavement with ease without jostling the cargo too much.

The NV200 is available in two trim levels. The base S model is priced from $20,835 including an $845 destination charge. It includes power windows, a trip computer, and AM/FM/CD radio with two door-mounted speakers. The $21,825 SV model adds power heated outside mirrors, power door locks with auto-locking capability, keyless entry, cruise control, steering wheel-mounted controls, and six cargo hooks in the cargo area. The technology package which adds the 5.8-inch touchscreen and NissanConnect, will cost you $950.

While the 2013 Nissan NV200 holds slightly less cargo than the current Ford Transit Connect, its fuel economy is competitive, and even the SV model is cheaper than a base model Transit Connect. It's a tidy cargo van that makes good economic sense, so long as it makes good utilitarian sense for your small business.