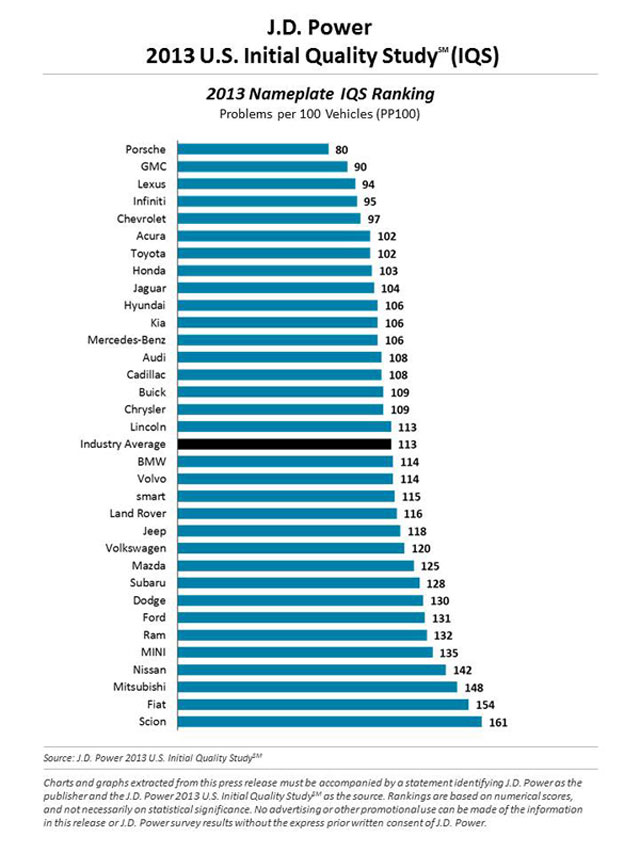 J.D. Power has just released its highly anticipated 2013 Initial Quality Study, and on the whole, it contains plenty of good news for consumers and automakers alike. However, it also signals a major shift in the way that we relate to our vehicles and what we expect of them.

The study is based on surveys of over 83,000 Americans who have either purchased or leased model-year 2013 vehicles. Over the course of 233 questions, Power assessed how many problems motorists had with their vehicles during the first 90 days of ownership. Power's goal, of course, is to get a feel for how well cars, trucks, and SUVs perform just after they've been driven off the lots.

The interesting thing is that, out of all the problems identified by new-car owners, only about one-third were related to mechanical problems. So, the things that we often worry about -- malfunctioning warning lights, dodgy brakes, etc. -- appear to be less of a problem than they might've been 10 or 20 years ago.

The downside is that the remaining two-thirds of problems were related to design flaws, like complicated infotainment systems that confuse and frustrate customers. Worse, those things can't easily be fixed. Take a car in because the "check engine" light is on, and the problem can often be resolved on the spot. Take a car in because you hate the layout of the navigation system, and you're probably up a creek.

In fact, only 9% of motorists who experienced design-related problems with their new vehicle said that the dealer was able to fix it when the car went in for repairs.

What does this tell us?

1. On the whole, today's vehicles are built pretty well.

2. We are becoming far more dependent on in-car technology than we used to be.

3. That technology needs to be intuitive and easy to use, whether we're in park or cruising at 70 mph.

4. Some automakers have a lot to learn about item #3.

As proof of that, look no further than Ford. Though the company's track record on mechanical problems is fine -- often better than the industry average -- its overly complex MyFord Touch and Sync systems have drawn the ire of countless owners. That's resulted in Ford's tumble on surveys like this since 2011.

Ford has been working hard to overcome such problems, but it's got a long way to go: of the 33 brands evaluated on Power's Initial Quality Survey, Ford clocked in at #27, its same rank as last year. On average, 2013 Ford saw 131 problems per 100 vehicles, far worse than the industry average of 113. (Though we should point out that Lincoln came in at #17, just above average.)

As usual, J.D. Power also awarded top-performers in each segment, from city car (2013 Smart fortwo) to large CUV (2013 Chevrolet Tahoe). For a complete rundown of those rankings, check out JDPower.com.