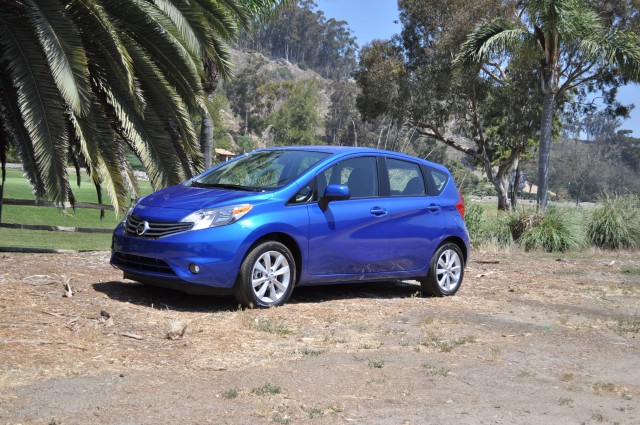 The Nissan Versa sedan was new for 2012, but for all kinds of global-product reasons, the company carried over the previous-generation Versa Hatchback for a couple of years.

At last, a new Versa hatchback is here, only its name has morphed into Versa Note. Will it eventually just become the Nissan Note, as it is around the world? Only Nissan's internals, and maybe their personal trainers, know.

On paper, the 2014 Versa Note makes a case as a strong rival to the Honda Fit and Hyundai Accent. The Versa sedan is the cheapest car you can buy in the U.S., and the hatch is close, at $14,780 including destination. It's inexpensive, roomy, has lots of technology features available, and it's fuel-efficient.

But how does this all translate in the real world?

The Versa Note is a tidy package. With short front and rear overhangs, it has an aero-smoothed shape that while not exciting, isn't as boring as the Toyota Yaris. Drag is somewhat low, at 0.3, and the taillights have similarities to the Juke and 370Z with a swoosh-like design. The Versa Note's rear end most resembles the Hyundai Accent hatchback, which isn't bad company.

Our favorite design element is the character line on the sides, which Nissan calls the squash line. It's supposed to remind you of the power and movement of a squash player, not of the vegetable.

The interior is arranged around a dual-cockpit theme, with two sweeping lines on the dashboard. The climate controls consist of three easy-to-use knobs. We dig the dual-gloveboxes, but the air vents on the side of the dashboard are round while the ones on the center stack are square. It's inconsistent. The dashboard is all hard plastic, but that's typical in this car class.


Under the hood of all 2014 Versa Notes there's a 109-horsepower, 1.6-liter four-cylinder engine mated to a five-speed manual transmission in the base car, or a CVT in upper trim models. This second-generation Nissan CVT is one of the better ones on the market, as it doesn't have that rubber-band like feeling when you wind it up. If you opt for the CVT, don't expect to get paddle shifters. Unfortunately we didn't have a chance to test the base Versa Note with a five-speed manual transmission.

With EPA ratings of 31 mpg city, 40 mpg highway, and 35 mpg combined, the 2014 Versa Note has great fuel economy. Our Versa Note said we averaged 32 mpg combined after zeroing out, with the air conditioning blasting and a heavy foot on the accelerator, but we'll reserve judgement until we can fill the tank ourselves.

On the road the Versa Note has no pretensions of being sporty or fun, but it is rather refined. While we like the weight of the steering, but there's a distinct lack of communication as to what's going on with the tires on the road. Power comes on smoothly and things pick up a bit around 3,000 rpm. The soft suspension manages to soak up road imperfections without losing its composure, an impressive feat for this class.

While it's impressive that the new Versa Note is 302 pounds lighter than the previous generation, it's even more impressive how quiet and refined it is on the highway for a subcompact vehicle. Few clunks or thunks make their way into the cabin. Nissan went to great lengths to tweak the aerodynamics of the Versa Note, and there's quite a bit of sound deadening placed around the vehicle.

The new 2014 Versa Note is a subcompact hatchback that competes against the Ford Fiesta, Chevrolet Sonic, Toyota Yaris, Kia Rio, and Hyundai Accent. And while it may be a small car, it's at the large end of the class.

While there is more than enough room inside, getting comfortable for some could be a challenge. The steering wheel tilts but doesn't telescope, and the front seat bottoms are a bit short, leaving our legs wondering where the support is.

Most people buying a hatchback are doing so to haul stuff, and the Versa Note can haul 21.4 cubic feet of stuff in its cargo area. That's before you take into account 60/40 split-folding rear seats which do in fact, fold flat. Nissan's also introduced a handy new cargo feature called Divide-N-Hide, which has us wondering if Nissan's paying Chrysler royalties or just an homage on the Stow-N-Go name. It's an adjustable floor in the rear cargo area that can hide items for storage while creating a flat load floor, and it's removable for when you need to maximize the cargo area's depth.

Lots of tech for not a lot of money


The Versa Note is available in three trim levels: S, S Plus, and SV. The base 2014 Versa Note is priced from $14,780 including a $790 destination charge. It gets air conditioning, an auxiliary input for the four-speaker audio system, manual windows mirrors, and locks, along with 4-way adjustable front bucket seats. Stepping up to S Plus model for $16,030 adds a continuously variable transmission (CVT), active grille shutters, and cruise control. The SV model priced from $16,780 includes Bluetooth, upgraded cloth seats with six-way adjustability for the driver, a leather-wrapped steering wheel, along with chrome and silver interior accents.

Opt for the $540 Convenience Package and you'll receive a a 4.3-inch touchscreen with satellite radio, USB input with iPod control, a rearview camera, and that Divide-N-Hide adjustable cargo floor. Add the $1,700 SL Package and you'll get front fog lights, front heated seats, push button start, and an easy-fill tire alert system. If you want navigation you'll need $800 for the SL Tech Package which adds navigation with NissanConnect, heated side view mirrors, and a class-exclusive Around View Monitor for those times when parking is just really hard.

You might have noticed leather wasn't mentioned anywhere on the options list, and that's because it's not available in the Versa Note. The SV model does have upgraded cloth seats, but if you want leather in your subcompact vehicle, you'll be shopping elsewhere.

NissanConnect isn't just a navigation system, it includes NavTraffic, NavWeather with real-time advisories. This is all controlled by a 5.8-inch color touchscreen. It also includes hands-free text messaging, streaming audio via Bluetooth, Pandora radio capability, points-of-interest by Google, and Google's send-to-car, which gives you the ability to send your destinations to the car from a computer.

Making parking easier is the Around View Monitor, which uses cameras placed around the car to give you a 360-degree view.

The new 2014 Nissan Versa is more fuel-efficient, and in some versions, cheaper than the model it replaces. While it's not sporty, it is roomy, with good packaging and lots of available technology.